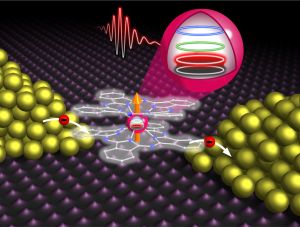 Researchers of Karlsruhe Institute of Technology (KIT) and their French partners succeeded in making an important step towards quantum computers. Using a spin cascade in single-molecule magnet, the scientists demonstrated how nuclear spins can be manipulated with electric fields. Electric manipulation allows for a quick and specific switching of quantum bits. The experimental results are now reported in the Science journal. DOI: 10.1126/science.1249802

One of the most ambitious goals of nanotechnology is to realize a quantum computer. Such a computer based on quantum mechanics principles is to solve tasks much more efficiently than a classical computer. While the latter works with bits that assume the value of zero or one, a quantum computer uses so-called quantum bits, briefly referred to as qubits, as smallest computation units. They may also assume values in between. Qubits may rely on nuclear spins, i.e. intrinsic angular momentums of atomic nuclei. They orient relative to a magnetic field in upward (up) or downward (down) direction. Interlinkage of qubits with each other results in mixed quantum states, on the basis of which many calculation steps can be executed in parallel.

To integrate nuclear spin-based qubits into electronic circuits and specifically trigger novel information processes, specific electric manipulation of nuclear spins is required. A team of scientists of the KIT and the Centre National de la Recherche Scientifique (CNRS) in Grenoble and Strasbourg recently succeeded for the first time in manipulating a single nuclear spin in a purely electric manner. “Use of electric instead of magnetic fields paves the way to addressing quantum states in conventional electronic circuits,“ explains Professor Mario Ruben, Head of the Molecular Materials Research Group of KIT’s Institute of Nanotechnology (INT). “There, quantum states can be manipulated specifically by so-called displacement currents. Then, they can be directly read out electronically.“

For their experiments, the researchers used a nuclear spin-qubit transistor that consists of a single-molecule magnet connected to three electrodes (source, drain, and gate). The single-molecule magnet is a TbPc2 molecule – a single metal ion of terbium that is enclosed by organic phthalocyanine molecules of carbon, nitrogen, and hydrogen atoms. The gap between the electric field and the spin is bridged by the so-called hyperfine-Stark effect that transforms the electric field into a local magnetic field. This quantum mechanics process can be transferred to all nuclear spin systems and, hence, opens up entirely novel perspectives for integrating quantum effects in nuclear spins into electronic circuits.