Energy-optimized Buildings: Keeping a Cool Head at the Workplace 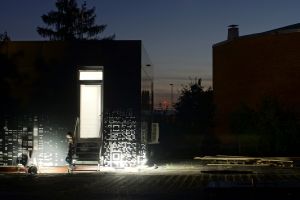 LOBSTER at night: The front is made of aluminum composite boards milled in a computer-supported manner. (Photo: Robin Nagel/Moritz Karl)

Working in a comfortable air-conditioned room at high temperatures: Architects of Karlsruhe Institute of Technology (KIT) built the new climate chamber LOBSTER to study what this may be like. The study focused on comfort and user behavior at office workplaces in energy-optimized buildings. KIT students were also involved in setting up the test chamber. A first study covered the effect of ceiling fans under summer conditions. The result: The fan enhances comfort only, if it has a cooling effect and users feel that their control power over the fan is effective.

LOBSTER means “Laboratory of Occupant Behavior, Satisfaction, Thermal Comfort, and Environmental Research”. The climate chamber was set up under the direction of Dr. Marcel Schweiker of the Building Science Division (fbta) of KIT’s Department of Architecture and funded by the Federal Ministry for Economic Affairs (BMWi) under the Energy-optimized Building (EnOB) program. Research in LOBSTER mainly covers thermal and visual comfort, i.e. comfort relating to natural and artificial lighting, at office workplaces as well as user behavior, user satisfaction, and energy-efficient building concepts. From the very beginning, the climate chamber was part of education in architecture. Students were involved in the planning and implementation phase. Within the framework of student projects, the wood frame construction, front, sliding wall in the vestibule, and the staircase of the building on KIT Campus West were developed.

The eye-catcher of the building is the front wall. It is made of aluminum composite plates. These plates were milled in a computer-supported manner and look like a QR code. LOBSTER can be rotated to simulate various building orientations or to reach a maximum heat input by tracking the position of the sun. The building is based on a ring mount made of steel beams and rests on eight wheel blocks. Rotation of the building is controlled via a touch screen. Due to this rotation, the staircase designed by students is a freely suspended stainless steel construction that can be adapted to various ground conditions and heights by height-adjustable feet.

LOBSTER is used to study thermal comfort under controlled conditions taking the outdoor climate into account. Under the “passive cooling” project, fbta scientists studied to what an extent comfort under summer conditions is modified by a ceiling fan. 21 test persons worked in LOBSTER for three days each. On the three days, the conditions were identical, except for the operation of a ceiling fan. On the first day, the test persons were not allowed to switch it on, while on the second day, they were. On the third day, users were allowed to use the fan as they wished. However, the fan was adjusted such that it hardly had any cooling effect. The fan worked, but airflow was directed upwards. In the course of the day, temperature in the room was increased constantly: In the morning, it was one degree below the adaptive comfort temperature. In the evening, it was three degrees above. “This comfort temperature is calculated from the external temperatures of the past days to which the body has adapted. In a typical summer in Karlsruhe, this temperature ranges between 23°C in the early summer and 27°C or more at the end of the summer,” Marcel Schweiker explains. The range between three degrees below and three degrees above this temperature is referred to as comfort zone. During the study performed in autumn 2013, the average room temperature was 26.4°C.

The result of the study: On the days, on which the participants were allowed to use the fan effectively, they rated the conditions at their office workplace much better than on the other days. “There clearly is no placebo effect: The possibility of switching on and off the fan alone is not sufficient to increase comfort,” Schweiker says. “Comfort is achieved only when the fan has a cooling effect and the feeling of controlling the fan is positive.” According to the study, a simple ceiling fan can considerably reduce the number of hours outside of the comfort zone in the building. Compared to air conditioning systems, costs for the installation and operation of fans are much lower.

The study on ceiling fans is reported in: Marcel Schweiker, Sabine Brasche, Maren Hawighorst, Wolfgang Bischof, and Andreas Wagner: Presenting LOBSTER, an innovative climate chamber, and the analysis of the effect of a ceiling fan on the thermal sensation and performance under summer conditions in an office-like setting. Proceedings of the 8th Windsor Conference: Counting the Cost of Comfort in a Changing World. Cumberland Lodge, Windsor, UK, 10-13 April 2014. London: Network for Comfort and Energy Use in Buildings, pp. 924-937. ISBN 978-0-9928957-0-9

The fbta is looking for participants in further studies. Click here for information: http://fbta.arch.kit.edu/508.php