Media Users Contribute to the Design of Business Models 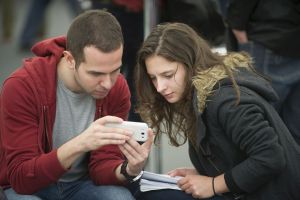 When Facebook took over the mobile messaging service “What’s App” early this year, numerous users changed to its competitors. Did the providers expect consequences of this dimension? Tilo Grenz from the Chair for Sociology of Knowledge of Karlsruhe Institute of Technology (KIT) thinks that this hardly was the case. Using smartphone applications as an example, he studies how mediatization – the increasing determination of culture and the society by media communica-tion – affects enterprises and their business models. This re-search is part of the priority program “Mediatized Worlds” funded by the German Research Foundation (DFG).

“Facebook and What’s App most probably did not expect that so many users would change to competitors. We study exactly these phenomena. Changes or new offers that are accepted or used in ways that completely differ from what was intended by their makers. This happens more often than you think,” says sociologist Tilo Grenz.

Among others, KIT scientists studied the development of platforms selling software applications for mobile devices (app stores). “The first iPhone had a few pre-installed apps only. Additional apps were to follow successively. In this way, Apple presumably wanted to bind its customers”, Grenz explains. This, however, encouraged hackers to by-pass use restrictions of the devices and to circulate own apps. Today, various app stores exist, in which also free programmers can sell their apps. For the providers, these platforms have become highly successful business models. “This example shows how the “makers” had to react to the unexpected behavior of the users. And it also shows that unintended consequences of an offer may drive innovation processes. Previous research has produced the key finding that inofficial extensions or tools are triggered by strategic measures taken by the providers,” the sociologist says. “Further development of media offers is no one-way road. Users contribute their own ideas and concepts and, hence, influence this process by various types of feedbacks.”

Together with his team, Grenz does not only study changes of so-ciety due to the increasing use of media and whether users expect a constantly changing or extending scope of media offers, but also changes of the providers. “Enterprises try to influence changes of the society as a result of novel media technologies. In the optimal case, such influence is to have an economic effect in favor of the providers. But it is difficult to predict whether their strategy will be successful,” Tilo Grenz says. The scientists gather information from conversations with journalists and hackers, in forums and similar platforms. “We conduct interviews, compile data from online contri-butions, interpret key stages, and reconstruct complex sequences of events or cases. For this purpose, we apply the method of permanent comparison, which means that we compare findings from various sources in order to finally confirm, complement or reject assumptions made with respect to relationships.”

Future research of the team will also cover a new phenomenon: Demediatization. “At the moment, users tend to be less willing to disclose data,” Grenz says. “This fear of data theft puts a massive pressure on some business models. However, also new business areas develop. We are interested in how providers react to econom-ic crises resulting from demediatization and in what new business concepts may be like, which do without one of the basic elements of mediatization, namely, extensive data processing.”

Communication, energy supply, mobility, industry, health care, lei-sure time: Digital technologies have long been part of our everyday life, they open up new opportunities and offer solutions for problems of society. At the same time, they pose challenges. Opportunities and risks will be in the focus of the Science Year 2014 – The Digital Society. At the KIT, researchers of all disciplines study various – technical and societal – aspects of digitization. The digital press kit of KIT relating to the Science Year 2014 contains short portraits, press releases, and videos:
http://www.pkm.kit.edu/digitalegesellschaft