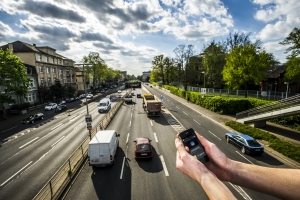 Big cities in the smog: Photos from Beijing and, more recently, Paris clearly illustrate the extent of fine dust pollution. But what about our direct environment? What is the pollution concentration near our favorite jogging route? Scientists of Karlsruhe Institute of Technology (KIT) are developing a sensor that can be connected easily to smartphones. In the future, users are to take part in drawing up a pollution map via participatory sensing. The precision of the map will be the higher, the more people will take part.

The principle of fine dust measurements using a smartphone corresponds to that of simple optical sensors. “Instead of the conventional infrared LED in the sensor, the flashlight of the smartphone emits light into the measurement area. This light is scattered by the possibly existing dust or smoke. The camera serves as a receptor and takes a picture representing the measurement result. The brightness of the pixels can then be converted into the dust concentration,” computer scientist Matthias Budde explains. He has developed the system as a member of the research group TECO of KIT’s Chair for Pervasive Computing.

The computer scientists have carried out comparative measurements to prove that the principle works. The smartphone sensors are not yet as precise as specialized instruments. However, their costs are much lower. “Detectors at the official measurement stations operated by the Baden-Württemberg State Agency for the Environment, Measurement, and Nature Conservation are very precise, but also very large, very expensive, and static. In Karlsruhe, for instance, only two measurement stations have been established,” Budde says. He plans to enhance accuracy by a high measurement density. Measurements of many, closely adjacent sensors may be combined to results of reduced inaccuracy. Thus, measurement errors could be reduced. Due to their close vicinity, the sensors might also be calibrated against each other. Budde thinks that a potential application scenario is joint measurement or participatory sensing: Interested citizens measure data at various places in their city and share them. These data may then be used to draw up a fine dust pollution map for the respective city in real time.

The sensor is planned to be attached to the smartphone by means of a magnet, for instance. Adaptation of electronics will not be required. Users who want to join participatory sensing will have to download the corresponding app. At the measurement point desired, the sensor is attached to the cell phone and the users take a photo or a video for measurement. The images can be evaluated locally or transmitted to a computer system that combines these data with other measurements and sends them back. Then, the fine dust concentration is displayed by the phone.

Presently, the smartphone sensor can measure concentrations of about one microgram per cubic meter. This is sufficient for detecting coarse dust and smoke, but not for typical fine dust concentrations in the microgram range. The scientists now plan to further increase the sensitivity of the sensors. This can be achieved among other means by ideally bundling the flashlight in the sensor by using hemispherical lenses. This principle is realized in a recently produced, far smaller second prototype. In addition, the evaluation algorithms and the smartphones themselves will be further developed. In the future, the devices will no longer compress the photos automatically, but also be able to supply raw data. This promises to increase the accuracy of the measurement results even further. Budde reckons that a smartphone sensor able to detect typical fine dust will have been developed in the course of next year.

The doctoral thesis of the computer scientist, however, does not only deal with the further development of the sensor and the possibilities of generating a map from the measurement points, but also with the question of how citizens can be motivated to participate. “Many people are intrinsically interested in such offers, because they see a benefit for themselves and others,” Budde says. For those, who like games, a gamification system might be feasible. Users might score points for the collection of data or measurements at certain locations. Also, data protection is an important aspect of participatory sensing. “Users have to be sure that the operator protects their data from being tracked or stolen and uses them for nothing but the pollution map.” An option is data aggregation, by means of which data are combined and bundled such that they can no longer be traced back to an individual person. But the central idea of participatory sensing is the joint benefit resulting from an increased information quality – which increases with the number of measurements.

Further dissemination of the video or parts of it for pedagogic, journalistic, editorial, or private purposes shall be permitted, provided that the source (Karlsruhe Institute of Technology) is indicated. Use or reproduction for purposes other than those mentioned above or further dissemination in the advertisement and commercial sectors are not permitted.