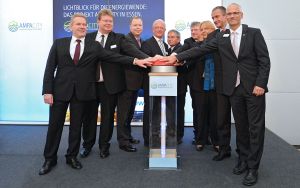 Project partners and guests of honor push the button to start the AmpaCity project in Essen. With this, the longest superconducting cable worldwide was commissioned officially. (Photo: RWE Deutschland AG)

Today, the longest superconducting energy cable in the world was integrated officially into the power grid of a German city. The cable of about 1 km in length now connects two transformer stations in the city center of Essen. This marks the start of a landmark practical test for the future energy supply of inner cities by RWE, Nexans, and KIT. Compared to conventional cables, the highly efficient and space-saving superconducting cable technology transports five times more power with hardly any losses.

Today’s celebration of the commissioning of the cable under the AmpaCity project took place at the Herkules transformer station in the inner city of Essen in the presence of Hannelore Kraft, Minister President of the state of North Rhine-Westphalia, Physics Nobel Prize Winner Johannes Georg Bednorz, one of the discoverers of high-temperature superconductivity, and numerous representatives of politics, industry, and science. KIT is one of the project partners of AmpaCity and contributes research and development work. In addition, it comprehensively studied the technical and economic feasibility of superconducting city grids and supports cable operation.

“This is a good day for […] the transformation of the energy system in Germany. Today, we start the first practical test of superconductor technology worldwide. The AmpaCity project is of high priority to North Rhine-Westphalia as a location of energy-producing industry,” Minister President Hannelore Kraft said.

“Research has to contribute to solving problems and meeting the needs of society,” emphasized Holger Hanselka, President of the Karlsruhe Institute of Technology. “The AmpaCity project is a good example of how contributions to current challenges like the energy turnaround may result from national long-term application-oriented fundamental research and close cooperation with innovative industry partners.”

Peter Terium, Chief Executive Officer of RWE AG, pointed out: “AmpaCity is one of the outstanding innovative projects executed by RWE with high dedication and passion. The transformation of the energy system does not only require courage, inventive talent, and reliable partnership. The transformation of the energy system also needs healthy, competent companies that are able to cope with the associated challenges. Here in Essen, this is demonstrated in an impressive manner.”

“For KIT, AmpaCity represents an important milestone in long-term research into and development of superconducting grid components. For us, the profound change to be experienced by the electricity grid as a result of the increasing integration of renewable energy sources is a motivation to continue our efforts to supply innovative superconducting solutions for a secure, stable, and efficient grid,” said Joachim Knebel, Head of the Mechanical and Electrical Engineering Division of KIT.

“I am excited,” admitted Physics Nobel Prize Winner Johannes Georg Bednorz in the early phase of the AmpaCity project already. “What started to be a dream in the 1980s is now becoming reality. Real operation of a superconducting cable […].” As regards the status of superconducting technology, he confirms “that Germany is at the top of development again.”

“High-temperature superconducting energy cables are ready for commercialization. It took about 30 years for high-temperature superconductors to develop from an idea worth a Nobel Prize to an industrial application,” explained Mathias Noe, Head of the KIT Institute of Technical Physics and project partner of AmpaCity. “Research has succeeded in identifying better suited materials, producing cables of enhanced mechanical robustness, and minimizing AC losses. Cable operation under the AmpaCity project is to demonstrate that technical requirements associated with the use in practice are fulfilled with a high reliability.”

The three-phase, concentric 10,000 volt cable of the AmpaCity project is designed for a transmission power of 40 megawatts. Compared to a copper cable of the same size, the superconducting cable can transport five times more electricity in spite of its thick cooling jacket. Moreover, electric losses are low. As a result of the properties of the superconducting material, a special ceramic, and cooling to -200°C, the cable is turned into an ideal electric conductor. In Essen, the 10,000 volt superconducting cable replaces a conventional 100,000 volt line.

Prior to the AmpaCity project, technical feasibility and economic efficiency of a superconducting cable on the inner-city medium-voltage level were studied extensively under the direction of KIT. Superconducting cables are the most reasonable option to reduce the use of high-voltage cables in urban grids, to simplify the grid structure, and to dismantle transformer stations that require considerable resources and large areas. High power can be transmitted cost-effectively in inner cities by copper medium-voltage cables, but the associated ohmic losses are much higher. Upon the successful completion of the now starting field test of two years’ duration, the high-voltage systems of the Essen power grid might be replaced largely by 10,000 volt superconductors in accordance with the preliminary study. In the medium term, this would lead to an enhanced efficiency, a leaner grid, lower operation and maintenance costs, and reduced area consumption.

While the project partners invested EUR 13.5 million in the AmpaCity pilot project, the funds granted by the Federal Ministry for Economic Affairs and Energy (BMWi) totaled EUR 5.9 million. The project partners are RWE as the grid operator, the cable producer Nexans, who also supplied a superconducting short circuit limiter for test operation, and Karlsruhe Institute of Technology (KIT) that scientifically supports the field test.