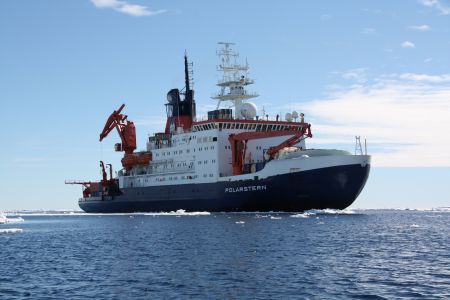 Using specially developed spectrometers, KIT climate re-searchers on board of the Polarstern will study the concentration of carbon dioxide and methane in the Earth’s atmosphere. The measurements made during the five-week trip from Capetown to Bremerhaven are to enhance the informative value of satellite data about the concentration of these greenhouse gases. The PS83 Atlantic expedition on the “floating large-scale laboratory” is planned to start on March 07 and to take presumably until April 13.

“It is a major objective of our measurement campaign to compare the data measured with respect to the north-south distribution of the methane and carbon dioxide concentration above the Atlantic ocean with satellite observations,” Dr. André Butz, Institute of Meteorology and Climate Research (IMF-ASF), says. The measurements on board of the Polarstern are executed by the KIT scientists in coop-eration with the Leibniz Institute for Tropospheric Research, Leipzig, and the OCEANET research project focusing on mass and energy transfer between the ocean and the atmosphere. The RemoteC (remote sensing of greenhouse gases for modeling the carbon cy-cle) research group of KIT has developed special greenhouse gas spectrometers suited for operation on a ship. “The interaction of the highly precise measurement with the mobility of the instruments was in the focus of the RemoteC project started in 2011,” Butz empha-sizes. The research project will be completed in 2015 and is aimed at better understanding the natural processes of the carbon and methane cycle. “These mechanisms determine which fraction of anthropogenic emissions remains in the atmosphere for how long and, hence, contributes to climate change,” Butz explains. As me-thane and carbon dioxide contribute significantly to the warming of the Earth’s surface and atmosphere, detailed findings with respect to their distribution are of crucial importance to climate research.

The data measured during the expedition will be compared with those measured by the Japanese Greenhouse Gases Observing Satellite (GOSAT) from space. Scientists hope that comparison of onboard measurements with the satellite information obtained from reflection of short-wave infrared radiation by the Earth and the at-mosphere will enhance the accuracy of the interpretation of satellite data.

The German Research Foundation (DFG) funds the mission under the RemoteC project headed by the physicist Butz: Meteorologists and physicists of KIT cooperate in globally determining by ground- and satellite-based remote sensing where greenhouse gas sources are located and when and where high methane and carbon dioxide concentrations are absorbed by natural processes. While numerous ground-based measurement stations are installed on land, hardly any data have been measured above the ocean so far.

The Polarstern is operated by the Alfred Wegener Institute, Helm-holtz Centre for Polar and Marine Research. Since 1982, the Polar-stern has completed more than 50 expeditions to the Arctic and Antarctic. The current expedition ANT-XXIX/10 (PS83) represents the last stage of the 30th expedition to the Antarctic. The ship was specially designed for work in the polar seas and presently is one of the highest-performing polar research vessels in the world. The Polarstern is owned by the Federal Republic of Germany, repre-sented by the Federal Ministry of Education and Research. The Polarstern spends almost 310 days a year at sea. In the northern summer, the vessel usually sails to and around Arctic waters, while the southern summer is spent in the Antarctic. During this, it sup-plies the German polar research station Neumayer III in the Antarctic. The ship has a crew of at most 44 and offers work facilities for another 50 scientists and technicians. Upon arrival at Bremerhaven, the Polarstern will be overhauled at the dockyard and start to the Arctic in the direction of Spitzbergen again from May 15.

Click here for the route of the Polarstern on the internet: http://www.awi.de/de/infrastruktur/schiffe/polarstern/wo_ist_polarstern/

The KIT Climate and Environment Center develops strategies and technologies to secure the natural bases of life. For this purpose, 660 employees of 32 institutes produce fundamental and application-oriented knowledge relating to climate and en-vironmental change. It is not only aimed at eliminating the causes of environmental problems, but increasingly at adapting to changed conditions.