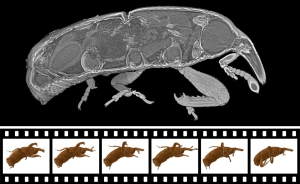 The 3D radiograph shows the hip joints of the weevil, but only the 3D X-ray film shows how they interlock during climbing. (Image: dos Santos Rolo et al., PNAS, 2014)

How does the hip joint of a crawling weevil move? A technique to record 3D X-ray films showing the internal movement dynamics in a spatially precise manner and, at the same time, in the temporal dimension has now been developed by researchers at ANKA, KIT’s Synchrotron Radiation Source. The scientists applied this technique to a living weevil. From up to 100,000 two-dimensional radiographs per second, they generated complete 3D film sequences in real time or slow motion. The results are now published in the Proceedings of the National Academy of Sciences (PNAS) DOI: 10.1073/pnas.1308650111.

Three-dimensional radiographs represent internal structures, but do not provide any information about movement sequences. Conventional computer tomography is not efficient enough to reproduce movement in a spatially precise manner and, at the same time, in the temporal dimension. Every individual three-dimensional image, called tomogram, is reconstructed from hundreds of two-dimensional radiographs. “To produce highly resolved tomograms at such recording speed, we had to adjust every setting screw, from the X-ray source to the pixel detector and we optimally attuned all process steps to each other,” Tomy dos Santos Rolo says. The doctoral student is the leading developer of the experimental setup. By making the 3D image frequencies approach the image rates known for 2D cine films, he reached the world record in high-speed tomography, i.e. a real 3D film with microscopic magnification.

For scientific evaluation, the three-dimensional contours of anatomic structures have to be clearly visible. This is achieved by the so-called phase contrast. If highly parallel X-rays pass the biological examination object, wave optics phenomena occur, which highlight the inner and outer contours. 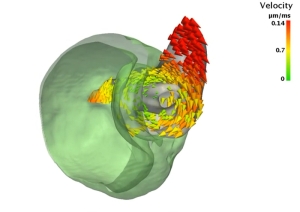 In the weevil’s hip joint, large skeleton parts move relative to each other and interlock like a screw and a nut. (Image: dos Santos Rolo et al., PNAS, 2014)

“It is these contours that matter to us. We want to distinguish individual functional elements that move relative to each other. That is why we need sharp contours,” Alexey Ershov, the expert for image analysis in the team, says. From the X-ray source to movement analysis, all process stages are designed to filter out image noise without reducing contrast. This also applies to the mathematic algorithms optimized for radiography. They reconstruct three spatial and one temporal dimension and derive exact movement patterns from the data.

In line with the first moving images – cinematography –, the scientists call their method “cinetomography”. In the late 19th century, movements of big animals were studied. Today, researchers can analyze internal biological processes of small organisms, as is now demonstrated for the recently discovered screw joint of the weevil. Insects, spiders, and crustaceans make up more than 80% of all species.

Cinetomography cannot only be used to image in four dimensions biological and biotechnological processes, but also combustion processes relevant to industry.