Switching an Antibiotic on and off with Light 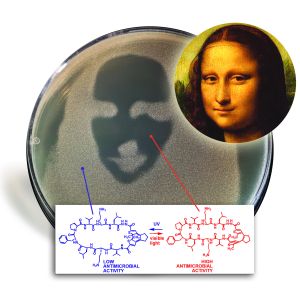 First, an inactivated photo-switchable antibiotic was added to a bacterial lawn. Then, a mask was applied and the lawn was exposed to light for the specific activation of the antibiotic. (Photo: Babii et al., Angewandte Chemie, 2014)

Scientists of the KIT and the University of Kiev have produced an antibiotic, whose biological activity can be controlled with light. Thanks to the robust diarylethene photoswitch, the antimicrobial effect of the peptide mimetic can be applied in a spatially and temporally specific manner. This might open up new options for the treatment of local infections, as side effects are reduced. The researchers present their photoactivable antibiotic with the new photomodule in a “Very Important Paper” of the journal “Angewandte Chemie”.

Photoswitchable molecules modify their structure and properties when exposed to light of an adequate wavelength. Among the photoswitches known are diarylethenes. By reversible photoisomerization, i.e. a reversible light-induced internal relocation of the molecule, the open form is turned into a closed form. Such photoswitch-able molecules are applied in molecular electronics and many other areas. Particularly interesting opportunities result from the insertion of photoswitches into biomolecules to control their activity by light. Interest focuses on so-called peptide mimetics, compounds whose major structural elements emulate a peptide, i.e. a small protein.

For the first time now, a group of researchers headed by Professor Anne S. Ulrich, Director of the Institute for Biological Interfaces 2 (IBG2) and holder of the Chair for Biochemistry at the Institute of Organic Chemistry (IOC) of KIT, has produced a photoswitchable peptide mimetic based on a diarylethene scaffold that can be photoisomerized reversibly. The scientists modified this building block into an amino acid analog and incorporated it directly into the backbone of the annular peptide antibiotic Gramicidin S. Biological activity of the resulting peptide mimetic can be controlled spatially and temporally with the help of UV and visible light. To demonstrate this, the scientists treated a bacterial film with the inactivated antibiotic and exposed it to light via a mask. As a result, the photoswitchable diarylethene was converted from a closed into an open form. Due to the structural modification induced, the entire substance molecule had a much higher antimicrobial effect. “In the future, such photoactivable antibiotics might be used as smart therapeutic agents against local bacterial infections,” Professor Anne S. Ulrich explains. “Usual side effects can also be minimized by switching.” Based on this strategy, new peptide-based agents against cancer might be feasible, as the newly developed photoactivable building block can also be applied in other peptide sequences.

The editors of the journal “Angewandte Chemie”, in which the researchers of KIT and the University of Kiev present their photo-activable antibiotic and their photoswitch, have rated this publication a “VIP – Very Important Paper”.