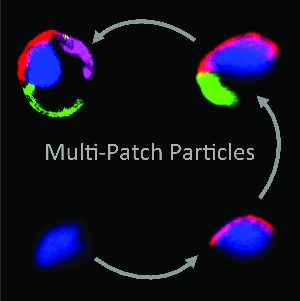 The small, but highly complex particles contain chemically different segments. (Photo: Angewandte Chemie)
A team of researchers of Karlsruhe Institute of Technology (KIT) and the University of Michigan/USA has produced novel microparticles, whose surface consists of three chemically different segments. These segments can be provided with different (bio-) molecules. Thanks to the specific spatial orientation of the attached molecules, the microparticles are suited for innovative applications in medicine, biochemistry, and engineering. The researchers now report about their development in the journal “Angewandte Chemie“.

“Microparticles with structured surfaces that can be loaded selectively with various molecules have an enormous potential for medical applications,” says Professor Christof Wöll, Head of the KIT Institute of Functional Interfaces (IFG) and Spokesperson of the Helmholtz BioInterfaces Programme, under which the scientific work was accomplished. In the future, the new microparticles might be applied for cancer therapy and loaded with three different substances, one of which identifies the cancer cell, the second one of which opens the cell wall, and the third one of which destroys the cancer cell.

Another potential application of the 3D microparticles is the artificial manufacture of biological tissues by the specific interaction of the particles with biological cells. But also technical applications, such as the manufacture of micromachines and nanorobots, might profit from these small, but highly complex particles. For instance, these particles allow for a self-organized assembly of three-dimensional structures. Movable miniaturized components for use in sensors or robots arms may be produced with the help of segmented microparticles, with one segment starting to swell or shrink in response to a certain stimulus.

“Whereas spatially controlled development of chemical and biological ligands for two-dimensional substrates is well established, there are hardly any processes for the spatially controlled attachment to three-dimensional objects, such as microparticles,” explains Jörg Lahann, Professor of KIT’s IFG and the University of Michigan. To obtain three separate chemically different segments, also referred to as patches, on a microparticle, Lahann and his colleagues apply the so-called electrohydrodynamic co-jetting technique: They pump three different polymer solutions through parallel capillaries. The liquid ejected is accelerated by an electric field and strongly stretched. At the same time, the solvent evaporates.

A microfiber consisting of three different compartments remains. By cutting the fiber, microparticles result, which are composed accordingly of three chemically different patches. As initial materials, three biodegradable polymers based on lactic acid are used. The polymers are equipped with three different chemical anchor groups. In orthogonal surface reactions that do not influence each other, various molecules couple to these anchor groups. With the help of fluorescence-tagged biomolecules, the researchers proved that single microparticles indeed possess three different patches. In a next step, the scientists want to reduce the microparticle size to about 200 nanometers for better adaptation to practical applications.