Higher Quality of Life for Cities in East Europe 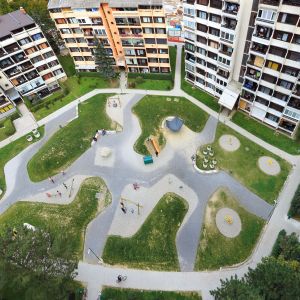 Green oasis in the middle of apartment complexes: A meeting point for people of all generations and various cultures in Velenje, Slovenia (Photo: Matey Vranic).

A center of cultural events, a museum of everyday culture, an open-air meeting point for all generations, and a center for supporting startups – these are exemplary results of “ReNew-Town”. The EU project, in which the KIT was involved, was aimed at upgrading cities in Central and East Europe. The concluding conference will take place on February 11 and 12 in Ljubljana, Slovenia. Apart from the execution of four pilot projects in Poland, Slovakia, Slovenia, and the Czech Republic, the project yielded guidelines for urban planners and citizens as well as a database.

Cities and urban districts in former socialist countries often face problems, such as the bad state of buildings and public squares or lacking facilities for social and cultural events. In addition, the unemployment rate is high and business opportunities are lacking. Under the “ReNewTown” project, experts of various disciplines from Germany, Poland, Slovenia, the Czech Republic, and Slovakia worked on solutions to improve the quality of life in cities in Central and East Europe. KIT’s Institute for Technology Assessment and Systems Analysis (ITAS) was the scientific partner of the project. “The project focused on enhancing the people’s identification with their living environment and on giving unused buildings of the socialist era a new function,” Christina Götz, ITAS, explains. Social and cultural offers were developed, public areas among apartment complexes were redesigned, and the foundation of new enterprises was promoted. “But not only the cities in the former socialist countries benefit from the results,” the sociologist adds. “Other cities are facing similar challenges, such as neglected public areas or lacking cultural offers. They may also profit from the solutions developed under ReNewTown.”

Pilot Projects: From the Museum to the Startup Center

Under the “ArtZONA” pilot project, a cultural center was established in a former industrial building in Nowa Huta, a district of Cracow/Poland. There, iron and steel plants were built in 1949. The district presently has about 220,000 inhabitants. “ArtZONA” now accommodates two music studios. Meanwhile, several concerts and other cultural events have been organized. In addition, a film studio offering workshops and a film center for young people are planned.

In Hnúšťa/Slovakia, a newly established museum shows everyday life in the city and region in the socialist era. The museum is de-signed as an apartment with historic furniture, appliances, pictures, and toys. It is accommodated in a building in front of an unused amphitheater renovated with the participation of voluntary helpers.

A neglected children’s playground among apartment complexes in the district of Gorica of the city of Velenje/Slovenia was turned into a green oasis, where people of all generations and various cultures may meet, relax, play, and talk. The inhabitants of the district took part in the redesign of the open-air meeting point by developing ideas and taking part in the work.

Apart from these four pilot projects, “ReNewTown” has produced two publications and a database. The ”Handbook of Models“ (http://www.renewtown.eu/brochures.html) addresses urban planners, representatives of municipalities, and politicians. It presents several regeneration projects in urban space from the point of view of the persons involved. The publication ”ENGAGE! Brighter Future in Your Hands“ (http://www.renewtown.eu/home.html) provides inspiration, gives practical tips, and describes experience gained from “ReNewTown” for citizens and non-government organizations planning projects in their own district. Other examples are listed in a database that presently contains descriptions of 148 projects from 69 cities in 13 countries:
(http://www.renewtown.eu/databases.html?&intcond=0&country=aa) Concluding Conference on February 11/12 in Ljubljana
The “ReNewTown” project is concluded by the conference “Renewed Post-Socialist City – Competitive and Attractive” on February 11 and 12 in the capital of Slovenia, Ljubljana. The conference addresses scientists, urban planners, and decision-makers in the urban context. Interested persons may register at http://konference.ef.uni-lj.si/renewtown. Participation is cost-free.

The “ReNewTown” project was executed under the EU “CENTRAL EUROPE Programme” and was cofunded from the “European Regional Development Fund” (ERDF).