A Universe for Children 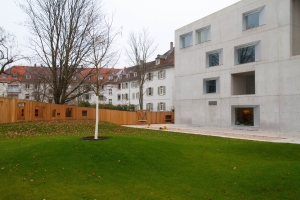 New daycare center: The KinderUniversum (Children’s Universe) was officially handed over by the State to KIT. (Photo: Emanuel Jöbstl, KIT)

With its new daycare center, KIT significantly improves the compatibility of job and family. Today, the daycare center KinderUniversum (Children’s Universe) was handed over officially to KIT by the state of Baden-Württemberg. In total, 115 children will be taken up. Consequently, KIT will nearly double the number of daycare places offered. The first groups have moved in in September already. The daycare center is operated by the educcare ggmbH, Cologne.

Two daycare groups of ten children each, who are aged up to three years, and a kindergarten group for 20 children aged from three to six moved into the new daycare center in mid-September already. A third daycare group followed in November. According to the plans of the operator, another four groups will follow until May 2014, among them another three daycare groups.

“Compatibility of job and family is a major concern of the Presidential Committee of KIT,” said KIT Vice President for Human Resources and Law, Dr. Elke Luise Barnstedt, during the opening ceremony in the presence of representatives of the state and KIT as well as childcare workers, parents, and children. “Opening of the Children’s Universe will result in the KIT offering a total of 215 all-day childcare places for its employees, which are funded with EUR 500,000 annually. This is a remarkable amount to help women reconcile their work and family life,” Barnstedt said. The head of the Karlsruhe Office for Assets and Construction in Baden-Württemberg (Amt Karlsruhe der Vermögen und Bau Baden-Württemberg), Günter Bachmann, added: “The building combines architectonic aesthetics with a high technical standard and functionality. It remains in the background and wishes to be enlivened and further developed by its users. It asks the children and the childcare workers to take it into possession and to design it and, hence, stimulates creativity and innovation.” 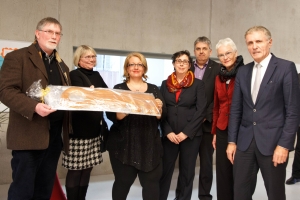 The pedagogical program of the Children’s Universe focuses on natural sciences and engineering. The daycare center participates in the program “Haus der kleinen Forscher” (House of little researchers). Physical exercise and sports as well as bilingualism are considered important. The Children’s Universe will be open on working days from 9 to 19 hrs, also during school holidays.

Construction costs totaled about EUR 5 million. The city of Karlsruhe funded about 2 millions, the Federal Republic of Germany contributed EUR 720,000. Construction started in September 2011. On January 01, 2014, all floors will be ready for occupancy. The Amt Karlsruhe der Vermögen und Bau Baden-Württemberg (Karlsruhe Office for Assets and Construction in Baden-Württemberg) was responsible for the construction, the building was designed by architect Bruno Fioretti Marquez, Berlin.