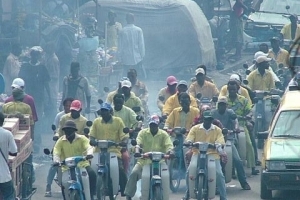 Road traffic is one of the biggest sources of air pollution in the rapidly growing cities in southern West Africa. (Photo: C. Liousse, UPS/CNRS)

The population of West Africa is growing rapidly. It has to cope with a complex meteorology, unreliable climate prognoses, and increasing air pollution. Within the next five years, extensive measurements will be accomplished in this region, new weather and climate models will be developed, and development policy is planned to be supported under the DACCIWA EU project. DACCIWA covers the complete chain from natural and anthropogenic emissions to impacts on the climate, ecosystems, and health. The project coordinated by KIT has a budget of nearly nine million euros.

Due to the highest population growth worldwide, massive urbanization, and a stable economic growth, countries in southern West Africa currently are exposed to rapid change. The quickly growing major cities are mainly located on the coast, agricultural production areas and forests can be found directly behind. In the cities, the emissions caused by man are increasing strongly. Among others, these emissions are caused by road traffic due to a largely outdated vehicle technology. As a result of the increasing fine dust pollution, people in the cities are increasingly suffering from respiratory diseases. High ozone concentrations typically occur outside of the cities and represent a risk factor for the health of rural population as well as for agricultural production.

According to the recent World Bank report, West Africa is among the regions that will be affected most by global climate change. Climatic impacts resulting from the massive conversion of natural forests into agricultural areas are accompanied by a change of regional climate. It has hardly been studied so far and is caused by anthropogenic emissions from the combustion of fossil fuels and biomass combined with natural emissions of plants. Formation of solid and liquid aerosol particles is increased. These aerosol particles act as condensation nuclei and modify cloud formation. “We assume that increased cloud formation affects the complete monsoon system,” Professor Peter Knippertz of the Institute of Meteorology and Climate Research (IMK) of KIT explains. “These relationships have hardly been studied for West Africa so far.” Improved climate prognosis for West Africa will also affect regions located far away. “We know, for example, that the West African monsoon interacts with the Indian monsoon and also represents a major parameter influencing Atlantic hurricanes.”

Within the framework of DACCIWA, the researchers will first compile current data in an extensive measurement campaign with satellites, aircraft, and ground-based instruments. With the help of the resulting dataset and numerous modeling activities, all relevant physical and chemical processes, such as emission, cloud formation, solar irradiation, precipitation, regional air circulation, climate, and health, will be understood much better. Work is aimed at developing a new generation of weather and climate models, predicting heavy monsoon rains, and better prognosticating climate change. “The findings obtained under DACCIWA will be transferred to other monsoon regions and highly valuable for development policy,” Professor Knippertz says.

Professor Knippertz coordinates the new interdisciplinary project DACCIWA (Dynamics-aerosol-chemistry-cloud interactions in West Africa) that started on December 01, 2013 and will have a duration of four and a half years. The project is funded by the EU under the 7th Framework Programme with EUR 8.75 million. Of these funds, 1.88 million go to KIT. 16 scientific institutions from Germany, Switzerland, France, Great Britain, Ghana, Nigeria as well as additional partners from Benin and the Ivory Coast are involved in DACCIWA. One of the German partners is the German Aerospace Center (DLR). Activities will focus on the investigation of the interactions of aerosols and clouds.

Together with two other projects, DACCIWA makes up the European Research Cluster “Aerosols and Climate”. The cluster started in December. Information on the Research Cluster and on the kickoff event is available at http://www.aerosols-climate.org.

Link to the report of the World Bank: