Karlsruhe’s East End on the Way to Sustainability 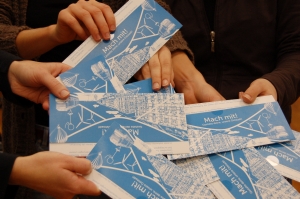 Public participation is one of the focal points of the project now launched in the Karlsruhe East End. (Photo: Alexandra Quint, KIT)

Advancing an existing urban quarter in social, ecological, economic and cultural terms in an effort to achieve sustainability is the key objective of the “Sustainable Quarter – Urban Lab” project of the Karlsruhe Institute of Technology (KIT) currently launched in the Karlsruhe East End. Together with the public, the city administration, politics, industry, the cultural scene and other community players, scientists try a number of projects testing old and new ideas and societal and technical innovations. The series of kick-off events begin with a “RepairCafé” on Saturday, November 30, 2013, between 4 and 8 p.m.; this is to be followed by a community meeting in the spring of 2014.

The “RepairCafé” idea is to help conserve resources instead of throwing away objects still fit for use. The Project Team of the “Sustainable Quarter,” together with its partners, help interested persons to repair damaged household objects, such as small furniture items, bicycles or radios, or to get advice in doing the job. Offerings and projects like these are the subject of the “Sustainable Quarter” urban development project of the KIT Institute for Technology Assessment and Systems Analysis (ITAS).

“The decisive feature of the Sustainable Quarter project is the active participation of the public in this eastern part of the city,” says Project Leader Dr. Oliver Parodi of ITAS. “Sustainability affects everybody and, ultimately, can succeed only in a common effort. As members of the public, as a group, a club, a company or an association: We are happy to welcome everybody willing to contribute to a sustainable development of the city’s East End and seeking contact with us.” The objective was to generate impulses in order to advance the East End in a long-term, careful process on the road to sustainability. This was to include the design of structures which would continue this development even after the official end of the project term.

“The Karlsruhe East End offers ideal preconditions for this project: This urban district enjoys a great variety in socio-cultural, functional and architectural respects, traditional close links among the players on the spot, openmindedness of the population, and proximity to the KIT, all of which constitutes an excellent breeding ground for new, sustainable urban development,” explains Parodi. This was a prerequisite for the Sustainable Quarter project to act as a model not only to other Karlsruhe districts, but also to other, especially European, cities. The project area was chosen on the basis of a thorough scientific analysis.

The Sustainable Quarter project is also associated with the wish to bring science closer to the people – and vice versa. In early 2014, the Project Team will inform about the Sustainable Quarter project at a community meeting. Members of the public then will have the opportunity to ask questions and inject their ideas and activities. 2014 also will be the year to start the first projects in the East End of the city. These could be activities in climate protection, recycle economy, health, education, energy supply, and projects, such as autonomous living for aged community members, neighborhood kitchens, a biomarket and regional market operated in the evenings for the working population, a science shop, fast lanes for bikers, multi-generation houses, sidewalks and road pavements equipped with sensors, a center for subsequent use of empty flats, street libraries. Specific projects could also be located in regions adjacent to the East End.

Information to the Population

In the past few months, some preliminary talks have been arranged with local players from industry, society, culture, and sports. Others will follow. On Tuesday, November 26, 2013, the approximately 7000 East End households received an information letter explaining the project and presenting the kickoff events in the winter of 2013 and the spring of 2014. Exchanges among the Project Team and the public in the Karlsruhe East End are in the focus of all these events.

This is an active contribution to resource conservation and against throwing away objects still fit for use: At the RepairCafé, participants can repair damaged household objects, such as small furniture items, bicycles and radios, or get advice on how to do the job. The team responsible for the Sustainable Quarter supports through these projects: FabLab Karlsruhe, Transition Town Karlsruhe – Karlsruhe im Wandel, KonsumGlobal Karlsruhe, Gemeinwohl Ökonomie Karlsruhe, and many other groupings committed to these endeavors.

Detailed information is available under
http://quartierzukunft.de/erstes-reparaturcafe-in-karlsruhe-reparieren-statt-kaufen/

Sustainable Quarter on Its Way!
Wednesday, December 18, 2013, 12 noon – 6 p.m.
Streets and squares in the East End, including the Tulla-Schule, Karl-Wilhelm-Platz, the site of the old slaughterhouse (Alter Schlachthof)

The Sustainable Quarter van can be found in the streets and squares of the Karlsruhe East End: The Sustainable Quarter Team, over a cup of coffee or tea, invite people to exchange ideas about the sustainable development of the Karlsruhe East End. We can be found at the Tulla-Schule, the Karl-Wilhelm-Platz, and on the premises of the old slaughterhouse (Alter Schlachthof), among other places.

This is where dialog comes in: The Sustainable Quarter Team present the project and are available for questions, criticism, and suggestions. There will be workshops for members of the public to introduce their ideas about sustainable urban life. Possible schemes for cooperation will be explored in an Offered-Wanted type of market. A cultural program will accompany the kickoff workshop.


Entertaining round for exchanging perspectives and visions, from scientific to personal to future urban mobility, among invited participants and committed persons from the region.