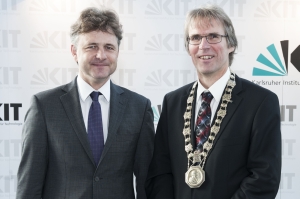 Sharpening the research profile and advancing the merger: These are the primary objectives of the KIT according to President Holger Hanselka’s outlook presented at the Annual Academic Celebration on Saturday (November 09, 2013). “We want to merge both worlds of KIT in a common corporate identity.” Moreover, KIT will attach even more importance to research-oriented education. The next big task will be the upcoming evaluation for program-oriented funding by the Helmholtz Association. Additionally, research areas will be interlinked strategically in the future. “This will be a rather exciting phase,” Hanselka said.

The KIT President emphasized that the evaluations for the program-oriented funding phase POF III will be given priority. Until spring next year, 15 proposals of KIT will be evaluated by the experts. Then, profound restructuration processes will start and research strengths of KIT will be interlinked more closely. “An example is the energy turnaround. In this respect, we will smartly combine our research activities in the areas of energy, IT, and mobility,” Hanselka emphasized. To reach its objectives, KIT needs “the complete team”, in the active part of KIT as well as in its environment.

Review of the Past Academic Year

KIT Vice President for Research and Information Detlef Löhe reviewed the developments of the past year. At the start of the current winter semester, the number of students increased again by about 360 to now 24,260. In addition, the number of completed doctorates increased to 460. Funds acquired from third parties decreased slightly to EUR 336 million, which is due among others to the end of funding granted under the Excellence Initiative. Löhe said that KIT will try to increase its number of collaborative research centers funded by the German Research Foundation.

As was pointed out by Löhe, the successes achieved in the past year prove that KIT scientists are given an excellent environment. Among these successes were the Erwin Schrödinger Prize of the Stifterverband für die Deutsche Wissenschaft and the Helmholtz Association for the team around Professor Klaus Butterbach-Bahl, two PhD awards of the Helmholtz Association, and two ERC Starting Grants in the amount of EUR 1.5 million each. According to Löhe, the “Falling Walls Science Start-up of the Year 2013” prize granted to the KIT spinoff cynora Gmbh on the eve of the Falling Walls Conference in Berlin yesterday also is big success.

Löhe thanked Professor Eberhard Umbach for his work as KIT President until the end of September 2013. “As a convincing character, he succeeded in keeping the KIT on course even in stormy weather,” Löhe said. He also thanked Dr. Peter Fritz who retired as KIT Vice President for Research and Innovation. In the past year, Professor Alexander Wanner was appointed first KIT Vice President for Higher Education and Academic Affairs.

Noah Fleischer, who formerly chaired the Independent Students Committee at KIT, commented the recent election of the first General Students Committee as a body of the legally reintroduced students union: “I hope that the representatives of the students and the KIT board will continue their good cooperation and their constructive exchange of information also in case of differing opinions, the common objective being to make the KIT better,” Fleischer said. 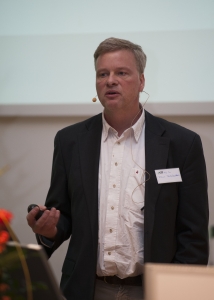 Awards and prizes are integral constituents of the program of the Annual Academic Celebration. KIT Vice President Alexander Wanner handed over eleven department teaching awards. Six young scientists were granted doctoral awards for excellent PhD theses in the KIT competence areas by KIT Vice President Detlef Löhe. Two Otto Haxel Awards of the Friends of Forschungszentrum Karlsruhe e.V. were handed over by Professor Manfred Popp, former Chairman of the Executive Board of Forschungszentrum Karlsruhe and Honorary Citizen of KIT. These awards acknowledge scientific and technical achievements and major impulses for industry and were granted to a team of researchers from the “Cognitive Systems Lab” of the Institute of Anthropomatics and a group of scientists from the Physikalisches Institut.

Video portraits of the laureates: www.pkm.kit.edu/jahresfeier_2013.php

Yesterday afternoon, graduates, who completed their studies or their PhD twenty five years ago at the former Universität Karlsruhe, were honored by KIT.