The Professor for Materials Science Is Responsible for Research and Information 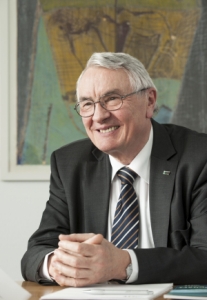 Professor Detlef Löhe will remain Vice President of KIT for Research and Information. During yesterday’s meeting, the KIT Senate confirmed the vote of the Supervisory Board. Löhe has been holding this office since the foundation of KIT in 2009. As one of the leading authors of the Institutional Strategy of the former Universität Karlsruhe in 2006, he was actively involved in the merger with the then Forschungszentrum Karlsruhe into KIT from the very beginning. Confirmation of the vote of the Supervisory Board by the Senate will now be followed by contract negotiations and the appointment procedure.

Chairperson of the KIT Supervisory Board Professor Renate Schubert appreciated the reelection of Detlef Löhe: “I am very pleased that Mr. Löhe will continue to work for KIT with his high commitment and creativity. As a member of the founding board, he also represents continuity in the Presidential Committee of KIT.”

“In the past, Mr. Löhe always stood up for the growing together of KIT. He developed and successfully established excellent instruments in particular for the promotion of young scientists,” emphasized the President of KIT, Professor Holger Hanselka. “That is why I am very pleased about the decision of the Supervisory Board and the Senate. It is one of our objectives to increase the research reputation of KIT on both the national and the international level. With Mr. Löhe, we are well set for this purpose.”

“I thank the KIT bodies for the confidence they have placed in me. As KIT Vice President, I will focus on KIT’s role in coordinated research projects on the German and the European level in the future and I plan to specifically use these research funding instruments for KIT. It will be my special concern to extensively promote young scientists and to provide them with clear perspectives in science,” Löhe said.

The envisaged term of office of the Vice President for Research and Information is six years from the date of his appointment.

Detlef Löhe was born in 1949 and studied mechanical engineering at the then Universität Karlsruhe (TH). As a scientist, he was conferred his Ph. D. in 1980 at the Institute for Materials Science I
(IWK I) of Universität Karlsruhe. After heading a research group and a project that was part of a collaborative research center at IWK I, Löhe was appointed professor for materials science by Universität Paderborn in 1991. In 1994, he returned to Karlsruhe as Professor and Head of the Institute for Materials Science I. From 1998 to 2000, Löhe was Dean of the Department of Mechanical Engineering and from 2003 to 2006, he was the spokesperson of a collaborative research center. In 2005, Löhe became Vice-Rector for Research. Since the foundation of KIT in 2009, he has been Vice President of KIT. Löhe is member of several committees and associations, among others of the Nominations Committee of the German Research Foundation (DFG) for the Gottfried Wilhelm Leibniz Program, the Deutsche Gesellschaft für Materialkunde (German Materials Science Society), and the American Society for Materials. Löhe is Deputy Chairman of the Scientific Commission of the Einstein Foundation, Berlin.