Pilot Project with the Baden-Württemberg State Agency for the Environment, Measurements, and Nature Conservation (LUBW) – First Automatic Measurement Network to Determine the Probability of Hailstorms in Regions 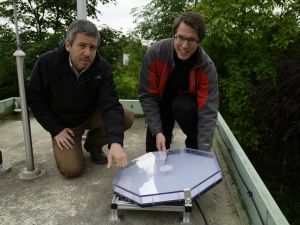 Installation of a hail sensor on the roof of the LUBW measurement station at Wiesloch: Professor Martin Löffler-Mang, Dr. Michael Kunz (from left to right; Photo: IMK-TRO).

Every year, severe hailstorms are damaging buildings, vehicles, and agricultural areas, with the losses totaling millions of euros. However, an automatic measurement network for such extreme events is still lacking in Germany. To change this situation, KIT has equipped ten measurement stations of the Baden-Württemberg State Agency for the Environment, Measurements, and Nature Conservation (LUBW) with new hail sensors. The weather and climate researchers of KIT want to further develop their methods to reconstruct hail from various data sets. It is their ultimate objective to better understand the hazards associated with hailstorms.

In late July, the heat wave ended abruptly and dramatically for some municipalities in southwest Germany: Above the foothills of the Black Forest, a thunder cell developed and passed directly overhead of Tübingen, Kirchheim/Teck, and Aalen. Hailstones having the size of tennis balls fell down from heaven and severely damaged houses, cars, and agriculturally used areas. According to first estimates of the insurance company of SV Sparkassenversicherung, the damage was far above 100 million Euros. “In Baden-Württemberg, hailstorms occur on about 30 days per year on the average. Hailstorms that are as severe as that of July this year, however, are very rare,” says Dr. Michael Kunz from the KIT Institute of Meteorology and Climate Research (IMK-TRO). He and his team want to better understand the hazards associated with hailstorms. This also means that they have to determine the probability of hailstorms in the regions.

As hailstorms occur locally, their width ranging from a few 100 m to several kilometers, their full extent can only be measured with remote sounding instruments. These are mainly precipitation radars like the new IMK radar commissioned in July 2013. “As a radar cannot distinguish between rain and hail, we have to adapt our methods to real hailstorm events. And this is our problem,” Kunz explains. “Hailstorms are registered manually by observers at a few stations of the German Weather Service only. Automatic hailstorm measurement is still lacking in Germany. Consequently, we do not have any measurements telling us where the hailstorms occurred for how long and how large the hailstones were.”

To close this gap, the researchers have equipped ten measurement stations of the Baden-Württemberg State Agency for the Environment, Measurements, and Nature Conservation (LUBW) with newly developed hail sensors. Now, it can be found out at which station the hailstorm occurred. “Cooperation with LUBW is very important, as their measurement stations have the infrastructure needed for us to retrieve the hailstorm measurements on the same or the next day,” Kunz says. The new hail sensors were developed by Professor Martin Löffler-Mang from htw saar. Small series of these sensors are presently being produced by inNET Monitoring AG, Altdorf (Switzerland). Via two highly sensitive microphones, the sensors measure the impulse and energy of the hailstones. These parameters are then converted into the diameter of the hailstones. “In this way, the spectrum of hailstones can be measured during a hailstorm, which means that we can determine the number of falling hailstones and their size,” Löffler-Mang explains. The researchers hope to derive new findings relating to the damage caused by hailstorms from the measured distributions of hailstone diameters and the other meteorological measurements made by the LUBW stations.

“Of course, ten stations are far from being sufficient to fully observe hailstorms. In this pilot project, we want to test operational and automatic long-term measurement of hailstorms. We chose locations that are known to have a high abundance of hailstorms, i.e. the area south of Stuttgart or Villingen-Schwenningen,” project manager Kunz explains. After a successful test phase, operation of additional hail sensors will be considered. Presently, the manufacturer is working on an autonomous version of the hail sensor that may be operated independently of the site.

Of course, Kunz knows that even the best available information cannot prevent severe damage, such as that in Tübingen, Kirchheim or Aalen. The IMK scientists, however, want to contribute to reducing the damage by using more hail-resistant construction materials in those regions that are found to be more often affected by hailstorms or by saving mobile assets, such as vehicles, in due time.