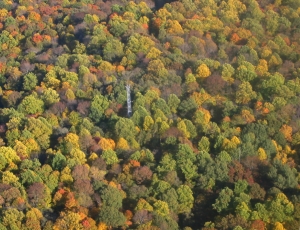 Aerial photo of the Morgan-Monroe State Forest in Indiana, one of seven measurement locations in the USA. (Photo: Jennifer Hutton)

While carbon dioxide concentration in the atmosphere increases, forests enhance their water use efficiency: They can take up more gas without losing more water. According to long-term measurements at many forest locations in the northern hemisphere, stomata on leaf surfaces react to more carbon dioxide, which is an example of the strategies of ecosystems to cope with changes. The study of researchers from the USA and KIT is now reported in the journal “Nature” (DOI: 10.1038/nature12291).


In the course of photosynthesis, plants bind carbon dioxide from the atmosphere. While the carbon dioxide is taken up through the open stomata of their leaves, water vapor is released. The ratio between the transpired water and bound carbon, so-called water use efficiency, is an indicator of the ecosystem’s function and plays a key role in the global water, energy, and carbon cycle. For the first time, a team of scientists, including the Head of the Atmospheric Environmental Research Division of the KIT Institute of Meteorology and Climate Research (IMK-IFU), Professor Hans Peter Schmid, has now studied the exchange of water and carbon in the ecosystem by means of long-term field measurements.


In cooperation with colleagues from Harvard University, Ohio State University, Indiana University, and the USDA Forest Service, Schmid evaluated measurements of seven forest locations in the Middle West and North East of the USA and compared them with 14 other forest locations in the northern hemisphere. The forests represent three compositions that are typical of the temperate and cold-temperate zone of the northern hemisphere. No active forest management measures are taken. Evaluation of the measurements reveals a significant increase in water use efficiency in the past two decades. To explain this development, the researchers analyzed various hypotheses. Apart from the increase in the carbon dioxide concentration, they also considered factors like the increasing availability of nitrogen, changes of the vegetation structure by growth, mechanical and thermal coupling between the crown and the atmosphere, and long-term deviation of measurement systems.


The scientists found that the increased water use efficiency can be attributed to a strong fertilizing effect of carbon dioxide. When the concentration of carbon dioxide in the atmosphere increases, the trees partly close the stomata on the leaf surface in order to keep the carbon dioxide concentration inside the leaves largely constant. “This shows that forests sensitively react to changes of the environment,” explains Professor Hans Peter Schmid, who conducts research at KIT’s Campus Alpine in Garmisch-Partenkirchen. “Ecosystems have strategies to cope with climate change and to use their resources efficiently.” According to Schmid, the increase in water use efficiency of the forests exceeds the assumptions made on the basis of theoretical studies and models.


As a result of the increased water use efficiency, the plants need less water in spite of an increased photosynthesis on the ecosystem level. In Schmid’s opinion, the results obtained so far from the still ongoing study suggest a shift in the water and carbon budget of the vegetation on Earth. “Probably, the role of stomata on the leaf surface in the interaction between forests and the climate has to be reevaluated and established vegetation-climate models need to be revised.” The long-term behavior of ecosystems subject to climate change and the development of appropriate measurement methods are among the central activities of IMK-IFU on KIT’s Campus Alpine.


The KIT Climate and Environment Center develops strategies and technologies to secure the natural bases of life. For this purpose, 660 employees of 32 institutes produce fundamental and application-oriented knowledge relating to climate and environmental change. It is not only aimed at eliminating the causes of environmental problems, but increasingly at adapting to changed conditions.