The Smallest Puzzle in the World

New LIGA2.X Process to Manufacture Highly Precise Plastic Microparts/Mature Application of Injection Molding Is Based on Research at ANKA 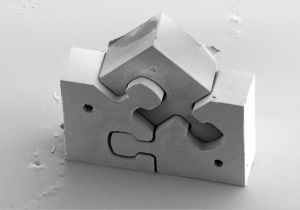 Three pieces of less than 1 mm in size each may be put together to the probably smallest puzzle in the world. For production, researchers used LIGA2.X, a new process to manufacture microstructured casting molds at KIT’s ANKA synchrotron source. Inexpensive series production is combined with highest precision on the microscale to produce e.g. components in watches, engines, or medical products. Now, large series of smallest parts can be injection-molded with highest accuracy.

The LIGA process can be used to produce microstructures from various metals, ceramics, or plastics. The acronym stands for lithography, electrodeposition, and molding. LIGA allows to produce structures with high aspect ratios (ratio between height and smallest width) and opens up various molding options. The process developed in the 1980s in Karlsruhe is subject to constant further development. Now, KIT scientists have conceived a new modification of the LIGA process.

The LIGA2.X process allows for an inexpensive series production of plastic microparts of less than 0.5 mm3 in volume. So far, a substrate plate linking all molded parts has been required for demolding. LIGA2.X does without this layer and allows for direct and separate injection molding of such microparts. Difficult time- and cost-consuming separation of the parts from the substrate plate is no longer needed. “LIGA2.X does not only reduce costs, but also ensures higher degrees of freedom in the arrangement of structured mold nests in multiple molds,” explains Jochen Heneka, scientist at the Institute of Microstructure Technology (IMT) and Institute for Applied Materials – Material Process Technology (IAM-WPT) of KIT.


The injection molding tools applied in LIGA2.X consist of three plates to demold the parts from the molds and four LIGA molds that can be installed in a tool plate and exchanged. By moving the first and second molding plate away from each other, the part is released from the LIGA mold. With the help of the third plate, the gate is removed properly. To produce the microstructured LIGA molds with the help of X-ray deep-etch lithography, the scientists used the ANKA synchrotron source on the Campus North of KIT.