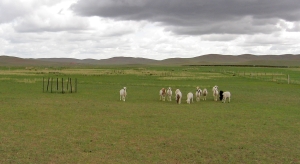 Large-area grazing reduces nitrous oxide emission from steppes into the atmosphere, according to a long-term study of the researchers. The photo shows a sheep-run in Inner Mongolia / China. (Photo: Benjamin Wolf)

Five researchers around Professor Klaus Butterbach-Bahl from Karlsruhe Institute of Technology (KIT) are granted the 2013 Stifterverband Science Award - Erwin Schrödinger Prize in the amount of EUR 50,000. With this award, the Stifterverband and Helmholtz Association recognize outstanding scientific achievements of researchers of various disciplines. The widely noted study by Butterbach-Bahl’s research team refuted the so far prevalent opinion that large-area grazing contributes to the constantly increasing nitrous oxide concentration in the atmosphere and, hence, to global warming.

The new president of Stifterverband, Andreas Barner, will hand over the award at the Helmholtz Annual Meeting on September 19 in Berlin. The study “Grazing-induced reduction of natural nitrous oxide release from continental steppe” was executed mainly by the biologist Professor Klaus Butterbach-Bahl and the geographer Dr. Michael Dannenmann from the Atmospheric Environmental Research Division of KIT’s Institute of Meteorology and Climate Research (IMK-IFU) as well as by the atmosphere physicist Professor Xunhua Zheng (Chinese Academy of Sciences), the chemist Professor Nicolas Brüggemann (Forschungszentrum Jülich), and geoecologist Dr. Benjamin Wolf (Empa/Zurich). While the project was carried out, Nicolas Brüggemann and Benjamin Wolf still worked at KIT. The findings obtained by combining ecosystems research with climate research were published in the journal “Nature” in 2010.

The scientists proved that, contrary to previous assumptions, livestock breeding in steppes does not increase the release of the greenhouse gas nitrous oxide into the atmosphere, but reduces it. Nitrous oxide (N2O), along with carbon dioxide (CO2) and methane, is among the gases contributing most to climate change and global warming. The greenhouse effect of a certain amount of N2O in the atmosphere exceeds that of the same amount of CO2 by a factor of about 300. About 60 % of anthropogenic nitrous oxide emissions are produced by agriculture, e.g. when microbes in the soil decompose nitrogen-containing feces of grazing sheep or cattle. Scientists consequently assumed that livestock breeding in steppes and prairies contributes to the constant increase of nitrous oxide concentration in the atmosphere.

In their research project funded by the German Research Foundation (DFG), the five researchers around Butterbach-Bahl proved that the situation is far more complex: Areas that are not used for livestock breeding actually release higher amounts of nitrous oxide over the year than areas on which animals are grazing. For their study, the scientists made measurements at several stations in the steppe of Inner Mongolia / China for a period of one year. They found that previous short-term studies had simply ignored the fact that the release of considerable amounts of nitrous oxide from steppe soil into the atmosphere is a natural process and that most of this natural emission is caused by the thawing period in spring.

It is exactly this emission that is reduced considerably by grazing, as was shown by the five researchers in their study: When animals are grazing the areas, they reduce the height of the grass. As a result, the snow is carried away by the wind more easily. The thinner snow cover reduces insulation of the grazing areas in the long and cold winter. Hence, soils are colder by up to 10°C, Butterbach-Bahl explains. “During the thawing period in March, less melting water is produced. This makes the soils drier,” the KIT researcher points out. “The cold and the aridity inhibit microbial activities: Less nitrous oxide is produced.”

The scientists around Butterbach-Bahl assume that previous calculations overestimated nitrous oxide emission from grazing areas by about 72 %. Still, it is a fact that nitrous oxide concentration in the atmosphere is increasing constantly. To understand this, much more research work remains to be done, Butterbach-Bahl emphasizes. Intensified animal husbandry will not solve the problem, as large amounts of methane will be released. Moreover, overgrazing of steppes causes soil degradation and high losses of the soil’s carbon reserves.

Since 1999, the Helmholtz Association and Stifterverband have been granting the Erwin Schrödinger Prize to recognize outstanding scientific achievements and technological innovations at the interface of various disciplines in medicine, natural sciences, and engineering. Work must have been accomplished by representatives of at least two disciplines. The prize money is donated alternately by Stifterverband and the Helmholtz Association, the prize is awarded annually. The prize winners can freely dispose of the money in the amount of EUR 50,000. Every year, the prize is presented officially at the Helmholtz Annual Meeting.