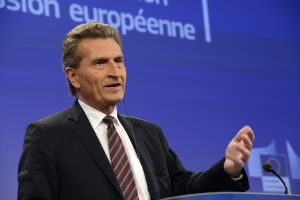 The German and European energy strategy and the challenges relating to economics, currency, and energy supply faced by Europe in the next years will be covered by the 2013 Heinrich Hertz guest professorship of the Karlsruher Universitätsgesellschaft (KUG, Karlsruhe University Society) and Karlsruhe Institute of Technology (KIT). The EU Commissioner for Energy and former Baden-Württemberg Minister-President Günther Oettinger will lecture publicly on July 02 and 08, 18 hrs, at the Tulla-Hörsaal on KIT Campus South (building 11.40). In addition, he will hold a seminar for KIT students.

In his first lecture as Heinrich Hertz guest professor on Tuesday, July 02, Günther Oettinger will speak about “An Energy Strategy for Europe”. With the adoption of the Europe 2020 Strategy at the latest has the transformation of the energy system become one of the major concerns of European politics. Oettinger will explain the roadmap 2015, the resulting goals for 2020, and the package of measures to be taken to establish a European domestic energy market for supporting the transformation of the European energy system. In the EU Energy Roadmap, extension of the infrastructure, energy efficiency, and renewable energies play central roles. According to Oettinger, transformation of German energy supply may only be successful in cooperation with the European partners. However, the EU must not be an island in the energy and climate protection sectors, as its share in worldwide CO2 emissions is 11 percent only and EU average import dependence exceeds 50 percent.

“Europe 2020: Challenges for Economics, Currency, and Energy” will be in the focus of the second lecture given by Günther Oettinger on Monday, July 08. The economic and financial crisis, the shale gas boom in the USA, young emerging economies with an enormous hunger for energy in Asia and in Latin America have led to a so far unknown worldwide competition for resources. Consequently, energy is of increasing importance to economic and security policies as well as to climate policy. The transformation of the European energy market towards a secure, sustainable, and still competitive system is one of the crucial projects in Europe according to Oettinger. It will influence almost all other policies of the Union. Oettinger will also hold a student session on Monday, July 08, 17.15 to 18.00 hrs (Redtenbacher-Hörsaal, building 10.91).

The Heinrich Hertz guest professorship is awarded every year to outstanding personalities from science, industry, culture, and politics for their services and contributions to research and society by the Karlsruhe University Society (KUG) and KIT. The KUG donated the guest professorship in the amount of EUR 7500 in 1987 on the occasion of the 100th anniversary of the discovery of electromagnetic waves by the physicist Heinrich Hertz at Universität Karlsruhe. The Karlsruhe University Society (KUG) is an association supporting the interests of KIT in the university sector.

About the Person
Since February 2010, Günther Oettinger has been member of the European Commission and responsible for the energy sector. From 2005 to 2010, he was Minister-President of the State of Baden-Württemberg. Oettinger was born on October 15, 1953 in Stuttgart and studied law and economics in Tübingen. From 1984 to 2010, Oettinger was member of Baden-Württemberg State Parliament. From 1991 to 2005, he chaired the CDU group in the state parliament. From 1999 to 2006, Günther Oettinger chaired the Federal Media Policy Committee of the CDU in Germany. From 2006 to 2010, he was chairman of the Committee of Media Policy Experts of CDU in Germany. Since 2005, he has been member of the board and presidential committee of CDU Deutschland. In April 2005, Günther Oettinger took office of the Baden-Württemberg Minister-President. In February 2010, he went to Brussels to work as a EU Commissioner.