Reduction of Climate-affecting Nitrous Oxide Has Been Underestimated so far 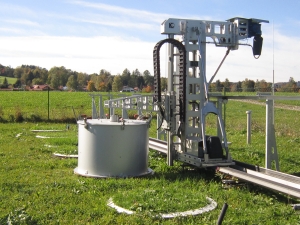 Soils can effectively release reactive nitrogen in non-hazardous form back into the atmosphere. This is the result of a status report on the production of nitrous oxide, which was drawn up with the support of researchers from the KIT Institute of Meteorology and Climate Research. As outlined in the journal “Philosophical Transactions of the Royal Society B: Biological Sciences”, reduction of climate-affecting nitrous oxide to non-hazardous molecular dinitrogen is of much higher relevance than assumed so far. This finding shows the way towards future reduction of nitrous oxide emissions.

Nitrous oxide (N2O) is a greenhouse gas changing the climate and damaging the ozone layer. The greenhouse effect of a certain amount of nitrous oxide in the atmosphere exceeds that of the same amount of carbon dioxide (CO2) by a factor of 300. Since the prohibition of chlorofluoroscarbons (CFC), N2O has been damaging the stratospheric ozone layer more strongly than any other substance. Mankind has more than doubled the global cycle of reactive nitrogen by the production and use of mineral fertilizers since the beginning of industrialization. This has not only led to a gradual enrichment of nutrients in ecosystems which reduces biodiversity, but also to an enhanced nitrogen conversion rate in soils and water bodies.

Increased decomposition of nitrate by special microorganisms, so-called microbial denitrification, results in an increased formation of nitrous oxide in the soil. It is emitted into the atmosphere. Compared to pre-industrial times, the concentration of N2O in the atmosphere has increased by about 20%. However, denitrification does not only produce N2O, but can also reduce it to molecular dinitrogen (N2). “Hence, the volume of nitrous oxide released from soils into the atmosphere corresponds to the balance of N2O production and reduction to N2. Molecular dinitrogen is completely harmless in ecological respects,” says Dr. Michael Dannenmann from the Atmospheric Environmental Research Division of the KIT Institute of Meteorology and Climate Research (IMK-IFU).

Recently, a team of scientists around the KIT climate researchers Professor Klaus Butterbach-Bahl, Dr. Ralf Kiese, and Dr. Michael Dannenmann from IMK-IFU was invited by the British Royal Society to publish a status report on N2O production and the processes responsible for it. In the journal “Philosophical Transactions of the Royal Society B: Biological Sciences”, the scientists list eight different microbiological and chemical processes of N2O formation. At the same time, eight processes are known to reduce N2O to N2.

So far, microbial reduction of N2O to N2 has hardly been understood. In contrast to N2O, measurements of the new formation of N2 are technically challenging, as the atmosphere consists of 78% N2. The most frequently used method to measure N2-N2O emission ratios has been the so-called acetylene inhibition method that bypasses the problem of N2 measurement by inhibiting N2O reduction: N2 production is measured indirectly as increased N2O production due to the addition of acetylene. This method revealed that per kilogram of emitted N2O, about the same amount of N2O was reduced to N2 by denitrification. Hence, it did not enter the atmosphere as a greenhouse gas and ozone destroyer, but as a non-hazardous gas.

In fact, N2O consumption by conversion into N2 is much higher, as is outlined by the IMK-IFU researchers in their publication. “The acetylene inhibition method leads to a systematic underestimation of the reduction of N2O to N2,” Dr. Michael Dannenmann explains. This is demonstrated by the use of modern methods for the direct measurement of N2 production, such as the helium incubation method developed by KIT. Studies based on such complex direct and, hence, more reliable N2 measurements reveal that the amount reduced to N2 exceeds the amount of emitted N2O by a factor of four on the average. Consequently, N2O reduction to N2 is of much higher relevance to the deactivation of reactive nitrogen than assumed so far. It may therefore be concluded that soils release non-hazardous reactive nitrogen much more effectively into the atmosphere.

The results of the researchers do not mean that less N2O is emitted. Increased relevance of N2O reduction to N2, however, shows a way towards future reduction of N2O emissions: “If we succeed in better understanding the control of N2O reduction, we will be able to increasingly convert the climate- and ozone-damaging nitrous oxide into a harmless gas by an adapted management of agricultural ecosystems for instance,” Michael Dannenmann says. According to the KIT scientists, it is still required to better understand how microbial diversity in the soil influences the reduction of N2O to N2. First promising findings have been obtained with the help of new molecular biology methods.