Soil Moisture Highs in May Aggravated Flood in June 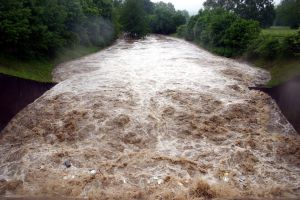 Torrential waters: The current flood mainly affects the east and south of Germany. (Photo: Gabi Zachmann, KIT)
The soil moisture highs in May aggravated the flood in June. This is the result of an analysis of the characteristics of the current flood by the Center for Disaster Management and Risk Reduction Technology (CEDIM). CEDIM is a joint institution of the German Research Centre for Geosciences, Potsdam (GFZ) and Karlsruhe Institute of Technology (KIT).

The analysis reveals that a strong low-pressure complex guided moist air to Central Europe from May 27 to June 03. As a consequence, clouds were retained by the northern edges of lower mountains and the Alps and persistent extensive rainfall occurred in Germany, the Czech Republic, Austria, and Switzerland, without breaking rainfall records. “This combination of rather unfavorable conditions – the soil could no longer absorb new rainfall after a very wet May – led to this extreme flood,” explains Bernhard Mühr from KIT. In late May, 40 percent of the land surface in Germany reached soil moisture highs.

“From the hydrological point of view, the 2013 June flood outperforms the flood of August 2002 in terms of areas affected. More than 50 percent of the German water network are hit by the flood that may only be compared with the event of July 1954 in modern times,” Dr. Kai Schröter from GFZ says. Current discharge peaks reach the order of both historical events, with the present Elbe and Saale values being expected to increase further.

According to the scientists, it is rather unusual that so many river areas are affected by heavy flooding (having a recurrence probability of more than 50 years) at the same time. In contrast to 2002, clear hot spots cannot be identified. “If the extent of damage will remain below that of the flood of August 2002, this will be due to progress in flood protection, holding levees, and a “flood-tested” population. In contrast to 2002, the population of the Elbe area also is quite experienced in coping with floods,” Dr. Florian Elmer from GFZ says. In addition, the regions in Southern Germany can manage floods comparably well due to their topography, type of settlements, and socio-economic structure.

CEDIM is an interdisciplinary research institution for disaster management operated jointly by the German Research Centre for Geosciences in Potsdam (GFZ) and Karlsruhe Institute of Technology (KIT). It contributes to the Earth System Knowledge Platform (ESKP) of the Helmholtz Association, on which current information and background knowledge on extreme weather and climate events, e.g. floods, will be supplied online from July 2013.

CEDIM will continue to work on this topic and publish updated versions of the report and more comprehensive analyses under the above link.

Report of the CEDIM project “Wettergefahren-Frühwarnung“ (weather hazards early warning) on meteorological aspects, precipitation volumes, and their distribution (on a daily basis):
http://www.wettergefahren-fruehwarnung.de/Ereignis/20130531_e.html