Writing without Keyboard: Handwriting Recognition on the Wrist

KIT Computer Scientists Receive the “Google Research Award” for their Research in the Area of Mobile Gesture-based Interfaces – “Airwriting”: Input Device for Three-dimensional Writing in Air 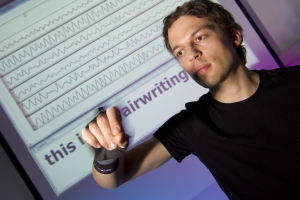 Typing text messages on the mobile phone via the tiny soft keyboard is very cumbersome. How about simply writing it into the air! This idea drove the development of “airwriting” made by computer scientists of Karlsruhe Institute of Technology (KIT). Sensors attached to a glove record hand movements, a computer system captures relevant signals and translates them into text. For the further development of mobile interfaces based on these ideas Professor Tanja Schultz and Dipl.-Inform. Christoph Amma received the “Google Faculty Research Award”, worth $ 81,000.

The system offers a new interface for wearable computing applications. These are computer systems worn like clothes, which can be integrated seamlessly into the everyday life of the user. “Information technology is used any time and anywhere, but smart phones are still working on the basis of virtual keyboards and small screens. However, gestures allow for new types of input – in particular for mobile devices or devices integrated in clothing. The interaction is embedded seamlessly in everyday life,” says doctoral student Christoph Amma, who has developed the system at the Cognitive Systems Lab (CSL) of KIT. “The airwriting glove is used to write letters into air, as if using an invisible board or pad.” For this purpose, acceleration sensors and gyroscopes are attached to the thin glove. Contrary to systems based on cameras, these sensors are very small, mobile, and robust. They record the movements of the hand and transmit them to a computer system via a wireless connection. The computer system first checks whether the user is indeed writing. “All movements that are not similar to writing, such as cooking, doing laundry, waving to someone, are ignored. The system runs in the background without interpreting every movement as computer input,” says Amma. The computer scientist thinks that the device is perfectly suited for future mixed-reality applications. For instance, in glasses with integrated miniaturized screens, news may be displayed to the user in the field of vision. “When such a system is combined with the possibility to input commands and texts by gestures, you do not even need a hand-held device,” emphasizes Amma.

During writing, the airwriting system decodes the letters by a pattern recognition method. Previous approaches mainly focused on the recognition of single gestures assigned to certain commands. Amma’s approach goes far beyond: For every letter of the alphabet, a statistical model of the characteristic signal pattern is stored. It also takes into account individual differences in the writing style. The system can recognize complete sentences written in capital letters and presently has a vocabulary of 8000 words. “The system has an error rate of 11%. When it is adapted to the individual writing style of the user, the error rate drops to 3%,” Christoph Amma says.

Scientists are now working on further refining the method to filter out writing. Moreover, they want to make the system smaller in order to increase wearing comfort and user acceptance. “This can be achieved with commercial components. An unobtrusive wrist band might be feasible, for example,” says Christoph Amma. It is also planned to integrate the system in smart phones. In this case, neither the wrist band nor the tiny soft keyboard would be required to writea text message.

The Faculty Research Awards Program supports academic research in computer science, engineering, and related fields. Through the program Google promotes interaction with universities, the award supports roughly the cost of one graduate student for one yeark. Prior to the Google award, Christoph Amma, Professor Tanja Schultz, and Marcus Georgi received the best paper award at last year’s “International Symposium on Wearable Computers”. For his initial prototype Christoph Amma was awarded the Plux Wireless Biosignals Prize in 2011.