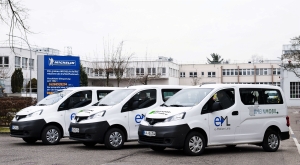 Staff members of Michelin and Siemens use electric vehicles for trips from Germany to France and back. The vehicles are supplied by a new company established by KIT graduates. (Photo: Sandra Göttisheim)

High battery costs still prevent many people from buying an electric vehicle. Is it possible to save money by using an electric vehicle instead of a conventional reference car? This question is studied by the companies of Michelin and Siemens in cooperation with research partners at Karlsruhe Institute of Technology (KIT) and the Fraunhofer Institute for Systems and Innovation Research ISI. In January 2013, the consortium was promised funding by the Federal Ministry of Transport, Building, and Urban Development (BMVBS) under the Baden-Württemberg LivingLab BWe mobil showcase project.

“If electric mobility is to be successful in Europe, it has to be economically efficient. We are looking for applications in which electric vehicles are cheaper than a reference car with a combustion engine,” says Dr. Olaf Wollersheim, head of the RheinMobil showcase project at Karlsruhe Institute of Technology (KIT). This is where the companies of Michelin and Siemens come in. Their staff members commute frequently between the German and French facilities. So far, conventional vehicles have been used for these trips. However, an electric vehicle may be cheaper, as every kilometer driven electrically costs less than driving on gasoline or diesel fuel. Wollersheim points out that the reason is the much higher efficiency of the electric drive train. “If the vehicle is used often, costs can be reduced considerably and the high purchasing price is compensated.”

In a few weeks from now, first electric vehicles will be used by the staff commuting from Alsace to the Michelin factory in Karlsruhe. At the same time, Siemens staff members will use an electric instead of a gasoline-based vehicle for their trips between the factories in Karlsruhe and Haguenau, France. In both cases, utilization of the vehicles is planned to be increased, such that the electric vehicle will be cheaper than the reference car with a combustion engine at the end of the project. This concept also convinced the federal government. The project scheduled for a duration of three years and having a volume of nearly two million euros will be funded by the BMVBF and the project partners at a ratio of 50 : 50.

“Michelin does not only develop and sell tires, but is also committed to viable mobility. This is one of the company’s principles outlined in the “Performance and Responsibility” Charter. The RheinMobil project fits perfectly to our company culture, as we can combine our values of ‘respect for people’ and ‘promoting innovation’”, explains Christian Metzger, the Karlsruhe plant manager of Michelin. “If electric mobility is to have a future, we have to bring electric vehicles onto the roads and make them visible,” Metzger says.

“By participating in the project, Siemens does not only want to contribute to environmental protection, we also want to enhance the acceptance of electric mobility among our staff members. For business trips to our factory at Haguenau, Alsace, which is located 70 km away, they can test the electric vehicle in practice,” says Hans-Georg Kumpfmüller, spokesman of the Karlsruhe Siemens plant management.

To reach the ambitious project objectives, smart operation strategies for the vehicles, charging stations at the right places, and efforts to convince the staff members of the companies are required. Fraunhofer ISI and KIT have already studied user expectations and commercialization obstacles. They know the factors that prevent people from using electric vehicles, such as high costs, small ranges, and limited availability of charging infrastructure.

“This is where we come in,” says Max Nastold, managing director of the company e-MotionLine. This company has just been established by KIT graduates and now received the first order to supply vehicles for the RheinMobil project. “We take care of the selection of economically most efficient vehicles, coordinate the charging infrastructure, and train the users in using this new technology.” Max Nastold is convinced that this concept can also be used to open up other economically efficient applications. As regards the use of the charging infrastructure on both sides of the German-French border, the RheinMobil partners cooperate closely with the CROss-border Mobility for EVs (CROME) project (http://crome.forschung.kit.edu)that is funded by several German and French ministries.

The RheinMobil project is one of about 40 projects in the Baden-Württemberg “LivingLab BWe mobil” electric mobility showcase. It is funded with about 2 million euros by the Federal Ministry of Transport, Building, and Urban Development (BMVBF) under the showcase program of the federal government. In April 2012, the federal government selected four regions in Germany as “electric mobility showcases”. In these regions, research and development of alternative drive trains are funded according to the decision made by German parliament. For the showcase project, the federation will provide funds in the total amount of EUR 180 million. In large-scale regional demonstration and pilot projects, electric mobility will be tested at the interface of energy system, vehicle, and traffic system. Further information can be found at www.schaufenster-elektromobilitaet.org.

“LivingLab BWe mobil“ Electric Mobility Showcase
In the Baden-Württemberg “LivingLab BWe mobil” showcase, more than 100 partners from industry, science, and public institutions are studying electric mobility in practice. The projects concentrate on the region of Stuttgart and the city of Karlsruhe and ensure high international visibility. “LivingLab BWe mobil” stands for a systematic approach based on coordinated projects for everybody to experience electric mobility from the electric bike to the electric car to the electric van to plug-in shuttle buses. The projects address aspects of intermodality, fleets, commercial transport, infrastructure and energy, urban and traffic planning, vehicle technology, communication, and participation as well as training and qualification. “LivingLab BWe mobil” is coordinated by the State Agency for Electric Mobility and Fuel Cell Technology e-mobil BW GmbH and the Stuttgart Regional Economic Development Corporation (WRS).

About Michelin
The worldwide active tire manufacturer Michelin has 115,000 employees and sales organizations in more than 170 countries. In line with its vision of an environmentally compatible mobility, the company develops, produces, and sells tires for nearly all types of vehicles. Michelin has 70 production facilities in 18 countries on five continents. For the constant further development of its complex products and technologies, Michelin possesses test and development centers in Europe, the USA, and Japan. The company admits its social responsibility. Among others, it has been organizing regularly the Michelin Challenge Bibendum since 1998. It is one of the largest forums worldwide for sustainable mobility. Michelin is committed to tradition. In 1931, the first production facility of Michelin in Germany was established in Karlsruhe. Today, this production facility is a recognized specialist for the manufacture of light truck tires. The highly automated production facilities are among the most modern facilities in the branch. Michelin produces a wide spectrum of tire dimensions of highest quality, mainly for the European market, but also for Japan, Mexico, and North America. In Germany, the Michelin Reifenwerke AG & Co. KGaA manufacture about 18 million tires at five facilities every year. More information can be found at www.michelin.de.

About Siemens AG
Siemens AG (Berlin and Munich) is a worldwide leading company in the electronics and electrical engineering sector. The group focuses on the areas of industry, energy, and healthcare and supplies infrastructure solutions for cities and urban areas in particular. For more than 165 years, Siemens has been standing for technical performance, innovation, quality, reliability, and internationality. Moreover, Siemens is the largest supplier of environmentally compatible technologies worldwide. About 40% of the company’s turnover are based on green products and solutions. In the past business year that ended on September 30, 2012, Siemens reached a turnover of 78.3 billion euros from continuing operations. After-tax income totaled 5.2 billion euros. In late September 2012, the company employed about 370,000 persons in continued operations worldwide. More information can be found on the internet at http://www.siemens.com.

About Fraunhofer ISI
The Fraunhofer Institute for Systems and Innovation Research, ISI, analyzes the origins and impacts of innovations. Fraunhofer ISI studies short- and long-term developments of innovation processes and the impacts of new technologies and services on society. On this basis, clients from industry, politics, and science are provided with recommendations for actions and perspectives for key decisions. The expertise of Fraunhofer ISI lies in the broad scientific competence as well as an interdisciplinary and systemic research approach.
www.isi.fraunhofer.de