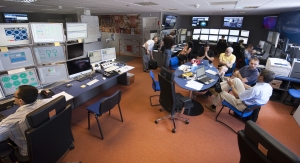 The CMS Group Karlsruhe: The researchers decisively contribute to the development and operation of the Compact Muon Solenoid (CMS), one of the two particle detectors at CERN, Geneva. (Photo: Markus Breig)

The “Karlsruhe School of Elementary Particle and Astroparticle Physics: Science and Technology“ (KSETA) will be opened officially with an inauguration symposium on Friday, February 01, 2013, 14.00 hrs, on KIT Campus North. At this graduate school, physicists and engineers will work on projects in the field of elementary particle and astroparticle physics. During this symposium, KIT will hand over the Julius Wess Award to Dr. Peter Jenni and Dr. Michel della Negra as well as the honorary doctorate to Professor James W. Cronin. Representatives of the media are cordially invited.

KSETA offers doctoral students in physics and engineering excellent education and training for careers in science and industry. The graduate school that acquired funding in the second phase of the Excellence Initiative pursues an interdisciplinary approach extending from astronomy to astrophysics to elementary particle physics to cosmology. The doctoral students take part in international projects, such as the CMS particle detector at the Large Hadron Collider (LHC) of CERN in Geneva, the Pierre Auger Observatory for cosmic rays in Argentina, the Karlsruhe Tritium Neutrino Experiment KA-TRIN, the Alpha Magnetic Spectrometer (AMS) on the international space station ISS, or the French-German detector for dark matter EDELWEISS. KSETA represents an important component of the KIT Elementary Particle and Astroparticle Physics Center (KCETA).

KIT Vice President for Research and Information, Professor Detlef Löhe, will welcome the guests of the inauguration symposium that will be held in the English language. Then, the scientific spokesman of KSETA, Professor Johannes Blümer, will present the concept of the graduate school under the heading of “Quarks, Cosmos, and Technology”. This presentation will be followed by the 2012 Julius Wess Award ceremony for outstanding achievements in the field of elementary particle and astroparticle physics. The Julius Wess Award goes to the Swiss Dr. Peter Jenni, former spokesman of the ATLAS particle detector at CERN, and to the French Dr. Michel della Negra, first spokesman of the Compact Muon Solenoid (CMS) experiment at CERN. By granting this award, KSETA honors both experimental particle physicists for the discovery of a Higgs-like particle.

Another highlight of the symposium will be the conferral of the honorary doctorate on Professor James W. Cronin. In 1980, the US-American physicist received the Nobel Prize in physics for the discovery of violations of fundamental symmetry principles in the decay of neutral K-mesons. Presently, he is studying cosmic rays at the Pierre Auger Observatory, in which KIT is a major partner. The award ceremony will be followed by presentations of the persons honored.

The ssymposium will take place on Friday, February 01, 2013, 14.00 hrs, at the Center for Advanced Technological and Environmental Training (FTU) on KIT Campus North. At 10.00 hrs on the same day, KSETA will organize a colloquium on elementary particle and astroparticle physics. Professor Ulrich Nierste will make the introductory speech. Then, doctoral students of KSETA will present their projects.