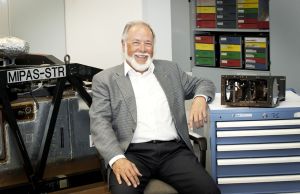 The international Committee on Space Research (COSPAR) awards the 2012 William Nordberg Medal to the former head of the Institute of Meteorology and Climate Research (IMK) of KIT, Professor Herbert Fischer. With this medal, COSPAR honors Fischer’s outstanding achievements in atmosphere research. Worldwide, he is considered one of the pioneers of Fourier transform infrared spectrometry that is used to measure the concentration of trace gases in the atmosphere, which, among others, cause the greenhouse effect. Fischer is the first German scientist receiving this medal.

COSPAR is the global umbrella organization for space research activities and promotes space-related fundamental and application-oriented research with spacecraft, rockets, and balloon probes. COSPAR attaches particular value to international projects and the exchange of data as well as their internationally accessible publication. With the William Nordberg Medal named after the Austrian-American physicist William Nordberg, pioneer of weather and remote sensing satellites, and awarded every two years, COSPAR honors a scientist with high merits in the application of space research.

Professor Herbert Fischer is the first German, who is granted this high distinction. The medal will be handed over on July 16 during the opening of this year’s scientific conference of COSPAR in Mysore/India. “This message caught me by surprise, as I did not know that I had been proposed as a candidate,” explains Professor Fischer. “This award is the icing on the cake of my scientific career.”

Since the 1980s, Herbert Fischer has decisively contributed to the development of Fourier transform infrared spectrometry for remote sensing of the atmosphere. Worldwide, he is deemed one of the pioneers of this technology. With the help of Fourier transform infrared spectrometers, researchers determine the concentration of trace gases in the atmosphere, which cause the greenhouse effect on earth and influence the ozone layer. It is the objective of these measurements to determine long-term trends of these trace gases and to enhance understanding of complex dynamic and chemical processes in the atmosphere. The crowning achievement of Professor Fischer’s work is the MIPAS (Michelson Interferometer for Passive Atmospheric Sounding) spectrometer on board of the ENVISAT European environmental satellite. For ten years now, MIPAS has been supplying unique global measurement data of the atmosphere. The spectrometer measures the thermal radiation emitted by atmospheric constituents, e.g. trace gases, aerosols, and clouds. From the infrared radiation spectra measured by MIPAS, a number of atmosphere parameters, such as pressure, temperature, and trace gas concentrations, are determined. MIPAS is characterized by a very high spectral resolution that allows to simultaneously observe several trace gases.

Herbert Fischer, born in 1942, studied physics at the Ludwig-Maximilians-Universität (LMU), Munich, where he was conferred his PhD and his postdoctoral lecture qualification in the field of meteorology. In 1986, he was appointed head of the joint Institute of Meteorology and Climate Research (IMK) of the then Kernforschungszentrum Karlsruhe and Universität Karlsruhe. At IMK, he established the divisions of “Trace Gases in the Stratosphere” and “Remote Sensing of Atmospheric Parameters”. Research conducted by Professor Fischer focuses on exchange processes between the earth’s surface and the atmosphere, propagation of atmospheric trace gases, the role of the tropopause region, and stratospheric ozone. He presently is Deputy Chairman of the German Meteorological Society and chairs the Board of the Environmental Physics Division of the European Physical Society, he is the Chairman of the Executive Board of the Reinhard Süring Foundation, and Deputy Chairman of the Section of Geophysics/Meteorology of the National Academy Leopoldina.