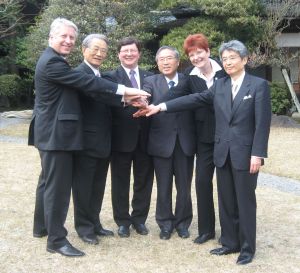 The universities of Heidelberg and Göttingen and Karlsruhe Institute of Technology (KIT) signed a joint statement to enhance their international cooperation with the Japanese universities of Kyoto, Osaka, and Tohoku. Within the framework of the German-Japanese University Consortium HeKKSaGOn, the rectors and presidents of the institutions involved met at Kyoto for the “2nd Japanese-German Presidents‘ Conference“ on March 29 and 30, 2012.


At the conference, scientists of various disciplines discussed promising fields of research. Planning of ongoing cooperation projects was continued. The next joint conference is planned to take place at the University of Göttingen in September 2013. The six partners founded the university consortium in 2010. HeKKSaGOn stands for Heidelberg – Kyoto – Karlsruhe – Sendai – Göttingen – Osaka – network.

The conference was opened by the former Japanese ambassador in Germany, Dr. Takahiro Shinyo, the Consul General Dr. Alexander Olbrich from the German General Consulate of Osaka-Kobe, Dieter Berg, Chairman of the Board of the Robert Bosch Foundation, and the President of the JSPS, Dr. Yuichiro Anzai.

The working groups did not only focus on general university policies and reforms, but also on scientific work, among others in social and cultural sciences, environmental sciences, neurosciences, and scientific computing. In the past months, promising joint research projects were planned. Increased mobility of the scientists for stays and lectures abroad is beginning to show. With the support of the Baden-Württemberg Foundation, the University of Heidelberg is presently establishing a Ph. D. exchange program with the three Japanese partners.

KIT’s delegation under the direction of the Chief Science Officer Professor Volker Saile consisted of scientists working in the fields of materials sciences, applied life sciences, robotics, and earth and the environment. In addition, representatives of the International Affairs Service Unit participated in the meeting in Japan. Already in July 2010 at Heidelberg did the rectors and presidents of the University of Heidelberg, the University of Göttingen, and Karlsruhe Institute of Technology and of the three leading universities of Japan, Kyoto University, Osaka University, and Tohuku University, sign a declaration to establish the German-Japanese University Consortium. This consortium is aimed at intensifying cooperation in research and education, initiating joint research projects and graduate programs, and promoting the exchange of scientists, post-graduates, and students.