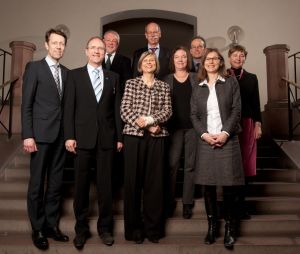 The Supervisory Board of KIT. (Photo: Jana Mayer)

During its meeting yesterday, the Supervisory Board of Karlsruhe Institute of Technology (KIT) elected Professor Dr. Renate Schubert, Head of the Institute for Environmental Decisions of ETH Zurich, as Chairperson. Vice Chairman is Dr. Andreas Kreimeyer, Member of the Board of BASF SE. The ten members of the KIT Supervisory Board have been in office since October 01, 2011. They replace the founding supervisory board, whose term of office ended by law on September 30.

“KIT as the merger of two institutions from various pillars of the science system is unique in Germany and, at the same time, a promising model for cooperation in the science sector. I look forward to accompanying KIT in its further development as the Chairperson of the Supervisory Board,” says Renate Schubert. The professor for national economy at ETH Zurich has been member of the German Advisory Council on Global Change since November 2000. In 2003, she was appointed Vice Chairperson and from 2004 to 2008, she chaired the Council. Since February 2004, she has been member and since 2009, Chairperson of the Advisory Board of the Center for Research on Environmental Decisions (CRED) at Columbia University.

Renate Schubert succeeds Professor Dr. Jürgen Mlynek, President of the Helmholtz Association of National Research Centers, who chaired the body since the foundation of KIT in October 2009.

Among the tasks of the KIT Supervisory Board is the election of the full-time members of the Presidential Committee. In addition, it enacts the structure and development plan as well as the construction plan of KIT. It is also responsible for the development and profiling of KIT, for enhancing its performance and competitiveness, as well as for reviewing finance and investment plans.

“The KIT Supervisory Board is an important instrument for the long-term development and implementation of the strategy of KIT. We are highly pleased that we were able to win such an experienced and competent scientist as Mrs. Schubert for chairing this body,” emphasized KIT Presidents Professor Eberhard Umbach and Professor Horst Hippler.

Members of the KIT Supervisory Board:

Professor Dr. Renate Schubert, Head of the Institute for Environmental Decisions, ETH Zurich,
Chair of the KIT Supervisory Board

Dr. Andreas Kreimeyer, Member of the Board of BASF SE,
Vice Chairman of the KIT Supervisory Board