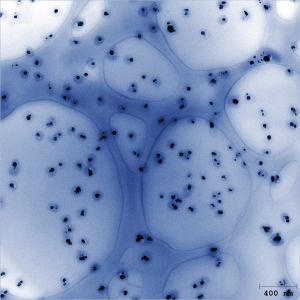 A novel type of salmon DNA- and nanosilver-based biopolymer film allows low-cost environmentally friendly storage of information. The organic system has been developed through interdisciplinary international cooperation of researchers from the DFG Center for Functional Nanostructures (CFN) at KIT and Institute of Photonics Technologies at the National Tsing Hua University in Taiwan. The DNA-based storage device is suited, among other things, for use in biotechnical applications, for example, as a biosensor component.

The system consists of a thin film of salmon DNA that has been embedded with silver salts and then sandwiched between two electrodes. UV stimulation causes the formation of silver nanoparticles through which current can pass to obtain a biopolymer film that is ready for data encoding. This data storage device, called WORM  („write-once-read-many“) system has recently been described in the Applied Physics Letters journal.

„This DNA-based storage device is less expensive than conventional systems based on inorganic materials like silicon,” explains Dr. Ljiljana Fruk who at CFN heads an interdisciplinary research group for DNA nanotechnology, biofunctionalization, and design of light-controlled nanocomponents. “Moreover,” she adds, “our storage device can be recycled and the materials are abundant in nature.”

When low voltage is applied, only a low current passes through the DNA-silver biopolymer film. That state is interpreted by the researchers as logical zero. However, as soon as the applied voltage exceeds a certain threshold, free charge carriers start causing a higher current, which is interpreted as logical one. Once reached, this conductivity cannot be reversed even by changing the voltage. Once turned on, the system stays on, no matter what voltage is applied. The researchers found that the material’s conductivity did not change significantly during 30 days. This means that  information is being retained.

The novel DNA-based data storage device has been manufactured combining current DNA nanotechnology findings with experience gained in manufacturing conventional polymer components. The researchers expect that their technique will be useful in the design of optical storage devices and suggest that it may have so-called plasmonics which makes use of nanometer-sized electronic excitations in metals. Dr. Fruk says that “research into DNA biopolymers is still in its beginnings. Further applications are certainly to be expected in the near future.” 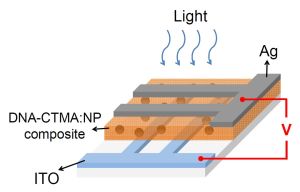