Why Snow Starts to Slip 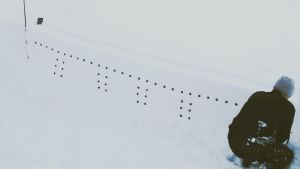 Development of an avalanche in the snow block: Acceleration sensors in the snow blanket measure breaking speed. (Photo: A. van Herwijnen)

For decades, the release of snow avalanches has been deemed to be understood, from a fundamental viewpoint at least. Snow scientists worldwide relied on the so-called shear crack model to determine the instant when the snowpack fails. According to that theory, the surface layers of the snow cover start to slip locally, and the slip surface expands by pushing and pulling on the surrounding snow. However, at least one third of the avalanches cannot be explained in this way. Materials scientists of the Karlsruhe Institute of Technology (KIT) therefore developed an entirely different hypothesis: They propose that so-called anti-cracks are responsible for the release of slab avalanches.

A natural snowpack consists of bonded layers. Only a fracture process can detach these layers from each other. During this process a crack propagates between two layers and separates them. If the crack keeps growing, the avalanche eventually releases. Until recently, crack growth in snow has been explained by the failure model of the shear crack. “But there are substantial contradictions between the statements based on this model and the measurements made in the field,” says Dr. Joachim Heierli from the Institute for Applied Materials (IAM). “Clearly, shear cracks cannot propagate in horizontal terrain. Nevertheless, the snow in such areas fractures frequently.” Moreover, shear cracks cannot explain the phenomenon of remote triggering. Indeed, many avalanche do not release where they are triggered, but in some distance from that point, for example, on the slope above the skier who triggered the avalanche.

KIT scientists therefore developed a new model for the formation of avalanches based on the concept of anti-cracks. Anti-cracks are produced when two layers are firmly forced against each other, and the weaker of the two collapses. The collapse releases energy which causes fracture to propagate in all directions. A similar thing happens when an avalanche develops, says Heierli: “Somewhere inside the snow cover there always is a weaker layer. This may be a highly porous intermediate layer, for instance. Under the weight of the snow cover resting on top of it, this layer is constantly in the danger of collapsing. When it begins to collapse, the process may in some cases sustain itself. The small grains composing the snow are broken loose, forced into the void spaces in between them, and the collapse rapidly propagates in all directions.” Within fractions of a second, the crack expands by up to 100 m, invisibly under the surface. Only then its effect becomes visible: Two layers of snow became detached from each other, and the avalanche starts sliding.

In their field experiments, the KIT scientists expose blocks of snow and watch for weak layers, most of which are situated between 50 and 100 cm below the surface, sometimes deeper. The scientists then cut a notch into the block to cause an anti-crack to develop. At that point they measure the parameters of fracture propagation. Currently, experiments of this type are being performed in order to compare the old and the new mathematical models with field observations. So far, there are indeed many indications of anti-cracking to prevail over shear-cracking, says Dr. Joachim Heierli: “In all fractures that have been measured so far, there is no doubt that the fracture layer always collapsed, which implies that an anti-crack has occurred.” In the future, snow research may have to update its fundamental understanding of slab avalanche release and take into account that anti-cracks often cause the snowpack to fail. This may considerably improve avalanche forecasting, say the KIT scientists.