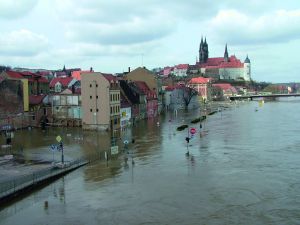 Flood in Meißen in 2006: Due to the rapid increase in the water level, time for early warning is short. (Photo: GFZ, German Research Centre for Geosciences)

The risk of floods in small and medium-sized river catchments in Germany will not decrease in the next decades. In some cases, it will even increase. Heavy precipitation will occur more frequently. These are the results of a study by the Center for Disaster and Risk Management Technology (CEDIM) presented in Karlsruhe today. CEDIM is a joint institution of the Karlsruhe Institute of Technology (KIT) and the Helmholtz Centre Potsdam – German Research Centre for Geosciences (GFZ).

“In contrast to the situation on Rhine, Elbe or Danube, heavy precipitation can rapidly raise the water level and cause torrential flow rates in small and medium-sized river catchments, such that the early warning time for the population and the emergency protection units is rather short,” says Professor Bruno Merz from GFZ. In the past, this led to casualities and severe damage of property. The precipitation causing such floods is frequently of limited extent. “That is why it is very difficult to predict. Long-term provisions with the identification of hazardous areas and planning of protection measures are highly important,” emphasize KIT climate researchers Professor Christoph Kottmeier and Dr. Gerd Schädler. In their study, the scientists analyze how often floods will occur in the coming decades, how intense they will be, and how the resulting runoff can be calculated.

Their study, performed over a period of three years, focuses on the rivers of Mulde and Ruhr situated in low mountain ranges and on the river Ammer which is of a more alpine character. On all three rivers, floods occurred in the past, leading to partly considerable damage. River Mulde, a tributary of river Elbe, was one of the most affected rivers during the 100-year flood in August 2002. The river Ammer bursted its banks in May 1999. On the river Ruhr, major floods happened in winter 1993/1994 and in August 2007. The study confirms that heavy precipitation in Germany will increase in the future. The models predict that the risk of floods on the river Ruhr will further increase in both summer and winter. An unchanged risk of floods with seasonal fluctuations persists on the rivers of Mulde and Ammer. These findings are in agreement with trend analyses, according to which the number of floods in the past increased particularly in the western parts of Germany.

An Unique Combination of Model Calculations
For their study, the KIT and GFZ meteorologists and hydrologists modeled the chain of “large scale weather situation – regional precipitation – runoff in the catchment area” occuring in nature by combining global and regional climate models with hydrological models. The researchers used a so far unique combination of model calculations. Similar to a consumer, who collects several offers to obtain a feeling for the price range, the scientists repeated their model calculations in order to assess the possible range of results. Calculations were made with two global and regional climate models each and three runoff models. Then, an uncertainty range was derived from this ensemble of data.

The CEDIM scientists simulated climate conditions with an extremely high resolution of 7 x 7 square kilometers, which is very rare in regional climate prognoses due to the high computational cost. Usually, regional climate studies are based on grids of far more than 100 square kilometers. The small-scale precipitation patterns relevant to runoff and the intensity of precipitation, however, can be determined realistically at finer resolutions only. Combination of the high spatial resolution with the ensemble of different climate models is unique so far. The ensemble analyses for the first time allow to make significance statements for smaller catchments. “With the help of this new methodology, we can reduce the uncertainty range, but an immanent residual uncertainty will remain,” say the scientists. In the future, research will have to increasingly deal with the problem of planning under this residual uncertainty.

The data and the new methodology of KIT and GFZ researchers will serve as a basis for further studies on flood-prone rivers in Germany and worldwide.

Karlsruhe Institute of Technology (KIT) is a public corporation according to the legislation of the state of Baden-Württemberg. It fulfills the mission of a university and the mission of a national research center of the Helmholtz Association. KIT focuses on a knowledge triangle that links the tasks of research, teaching, and innovation.

The GFZ German Research Centre for Geosciences is the national research center for earth sciences in Germany. It investigates the “System Earth” at locations all over the world with all the geological, physical, chemical, and biological processes which occur at its surface and in its interior.