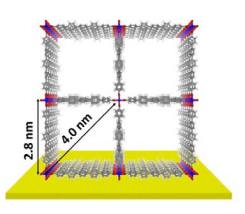 Researchers of the KIT Institute of Functional Interfaces (IFG), Jacobs University Bremen, and other institutions have developed a new method to produce metal-organic frameworks (MOFs). By means of the so-called liquid-phase epitaxy, the scientists succeeded in producing a new class of MOFs with a pore size never reached before. These frameworks open up interesting applications in medicine, optics, and photonics. The new class of MOFs, called “SURMOF 2”, is presented in the “Nature Scientific Reports” journal. .


Metal-organic frameworks (MOFs) can store nanoscaled objects and make them available for various applications. For this reason, they are of particular interest in many research areas, including materials sciences, biology, and medicine. MOFs are highly ordered molecular systems, consisting of metal nodes and organic rods. The pores in these frameworks are freely accessible. MOFs are used in powder form to store hydrogen and other small molecules, such as carbon dioxide or methane. For more complex applications, such as the storage and subsequent release of antibiotics, MOF coatings of higher mechanical loadability are required.


At the KIT Institute of Functional Interfaces (IFG), the team of the head of institute Professor Christof Wöll is working on new methods for the production of MOFs. They make the MOF structures grow epitaxially, i.e. in layer-by-layer scheme, on the surface of substrates (SURMOFs – Surface-mounted Metal-organic Frameworks). In this way, the size and shape of the pores as well as their chemical functionality can be adjusted to the planned application. A special method developed by the IFG, the so-called liquid-phase epitaxy (LPE), allows for the production of framework structures that cannot be generated by conventional wet chemical methods. Detailed theoretical analysis by the group of Professor Heine of Jacobs University Bremen revealed that the interactions between the organic rods are responsible for the stability of these frameworks with large pores. In the Nature Scientific Reports journal, the researchers from IFG and the Institute of Organic Chemistry (IOC) of KIT, Jacobs University Bremen, and other institutions in Mainz, Bielefeld, and Thuwal/Saudi Arabia present a series of structurally related, highly symmetric frameworks with very large pores, which were produced by means of the LPE method.


These novel MOFs that are referred to as “SURMOFs 2” are produced by synthesizing various special organic molecules of variable lengths. The pore size of the new metal-organic frameworks is three times three nanometers. Hence, the pores have sufficient space for small proteins. Now, the researchers are working on increasing the length of the organic rods in order to be able to store even larger proteins and possibly also metallic nanoparticles in the next step. This will allow for interesting applications in optics and photonics.


“We think that SURMOFs 2 will have considerable potentials as optical materials. In the next step, we plan to produceheterolayers, in which different materials will be stacked on top of each other,” explains Professor Christof Wöll from the IFG. “The application potential of metal-organic frameworks can hardly be predicted at the moment. MOFs are composed structures. Chemists have learned how the components may be combined in a framework. Now, it will be important to use the variety of molecules known in chemistry to develop new materials with new application potentials that might revolutionize catalysis, sensor technology, or logical storage materials. Computer simulations are ideal to determine the components to be used for producing frameworks with optimum properties at the laboratory,” explains Professor Thomas Heine from Jacobs University Bremen.