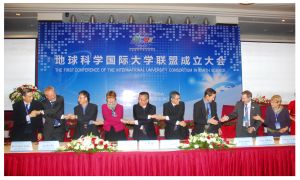 The IUCES partners at the founding meeting in Wuhan/China with (2nd from the left) Dr. Karl-Friedrich Ziegahn, CSO of KIT. (Photo: IUCES)

Eleven universities from seven countries, all renowned in earth sciences, have established the “International University Consortium in Earth Science“ (IUCES). KIT is the only German institution that has joined this top-class consortium. IUCES is aimed at enhancing cooperation in geosciences, hydrosciences, and environmental sciences. In the long term, it wishes to act as an international contact partner for politics, media, and society. The official IUCES founding meeting took place at Wuhan/China in November this year.


Among the IUCES partners are the Lawrence Berkeley National Lab and Stanford University (both USA), the Université Pierre et Marie Curie (Paris), and the University of Hong Kong. The network was initiated by the China University of Geosciences (CUG), Wuhan. The president of the CUG, Professor Yanxin Wang, was elected the founding president of IUCES. At the first meeting, KIT was represented by Chief Science Officer Dr. Karl-Friedrich Ziegahn and Nico Goldscheider, Professor of Hydrogeology of the Institute of Applied Geosciences (AGW).


“IUCES may give earth sciences worldwide the attention they deserve”, says Karl-Friedrich Ziegahn. “Geosciences, hydrosciences, and environmental sciences as well as related disciplines are of decisive importance to the future of our Earth and its population. The spectrum of topics extends from the search for rare earths to water resources management to sustainable energy supply.“ These topics correspond to the activities pursued by the KIT Department of Civil Engineering, Geo- and Environmental Sciences, the KIT Department of Physics, the KIT Climate and Environment Center, and the KIT Energy Center. “The IUCES consortium offers major opportunities to all institutes of KIT dealing with earth sciences,” Nico Goldscheider explains. As liaison officer, he is responsible for maintaining the contacts to other IUCES members.


Initially, the consortium was designed for cooperation in education. Meanwhile, it is also envisaged to cooperate in research. It is planned to initiate joint projects and to exchange scientists and students. The next activity planned will be a summer school in China on “Water in Geological Processes” for Ph. D. students of IUCES members. In the future, summer schools will be organized annually at changing locations. Moreover, IUCES is to gain worldwide visibility as a renowned network of competence. In the long term, IUCES as a neutral institution plans to make its expertise available to the public. “Via IUCES, KIT will have the opportunity to enhance its international presence in the area of earth and the environment,” says Ziegahn.