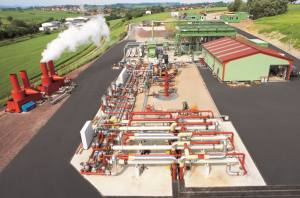 Today, a workshop on the future role of geothermal energy in Europe’s heat supply took place, which was initiated by the European Commission. The event “Future Utilization of Geothermal Energy in Urban Areas” focusing on geothermal power and heat production in urban areas also featured the European Commissioner Günther H. Oettinger as a speaker. It was organized by Karlsruhe Institute of Technology (KIT) and the Helmholtz Centre Potsdam – GFZ German Research Centre for Geosciences, both members of the Helmholtz Association.

“Conurbations are centers of energy consumption. In Germany alone, more than 60% of the energy consumed are used for heat supply. Most of this energy is based on fossil fuels. The potential of deep geothermal energy would cover several times this consumption,” explained Professor Dr. Jürgen Mlynek, President of the Helmholtz Association of National Research Centers. “Heat supply of the federal capital, for example, is based on fossil fuels, their share being more than 98%. Deep geothermal energy may cover these needs. The Helmholtz Association has launched an extensive research program on deep geothermal energy, under which experts of the Helmholtz Centers in Potsdam and Karlsruhe with the support of the Helmholtz Center in Leipzig (UFZ) develop solutions for utilizing geothermal resources,” added Mlynek.

Actually, geothermal energy is a renewable energy option having an enormous potential: The 2011 IPCC Report outlines that the top five kilometers of Europe’s earth’s crust alone contain sufficient energy to annually supply Europe with about 4000 TWh electricity and 2000 TWh heat, which corresponds to about the total annual consumption of Europe. As geothermal energy has base-load capacity and does not depend on fluctuations of the weather, use of 5% of this potential would be sufficient to stabilize electricity grids when feeding in wind and solar power. Numerous geothermal power plants have already been installed or are presently being planned in Europe. Every year, these plants might supply 86.1 TWh of heat and 14 TWh of electricity from geothermal sources. Today already are several billion liters of fuel oil saved in this way. In urban areas in particular, fossil-based heaters might be operated with geothermal energy to ensure secure and low-CO2 heat supply. In Germany, the south (Rhine valley, upper Bavaria) is particularly suited for an extensive use of geothermal energy for base-load power supply. Here, the large distance to the wind parks in Northern Germany and the solar parks in Southern Europe will require the construction of big electricity lines and development of new storage technologies.

In his video message, KIT President Professor Eberhard Umbach pointed out that KIT’s research activities concentrate on the highly populated and industrialized areas of the upper Rhine valley and the geothermal energy projects in Bruchsal, Landau, Insheim, and Soultz-sous-Forêts, France. “KIT scientists are working on solutions for an environmentally compatible and safe use of geothermal energy taking into consideration the needs and interests of the population.” According to Umbach, studies of the State Research Center for Geothermal Energy, an institution of the state of Baden-Württemberg at KIT, focus on the safety of geothermal power plants. He emphasized the importance of training young scientists in close cooperation with industrial partners.

Geothermal energy research of the Helmholtz Association is embedded in the “Joint Programme Geothermal Energy” of EERA, the European Energy Research Alliance. Under the direction of the GFZ, 25 European research institutes from eleven countries are working on the development of cost-efficient technologies for the sustainable and extended use of geothermal energy. In the short term, this program is aimed at increasing geothermal electricity produced by conventional geothermal power plants by 2 to 10 gigawatt. Although volcanic areas like Iceland are particularly suited for this purpose, geothermal energy systems can also be applied as so-called “enhanced geothermal systems” (EGS) in areas of smaller thermal energy. Such systems are subject of international cooperation projects at KIT and GFZ to supply heat and/or electricity in urban regions irrespective of the location. In this way, consumption of fossil fuels in conurbations can be reduced sustainably.

Karlsruhe Institute of Technology (KIT) is one of Europe’s leading energy research establishments. Research, education, and innovation at KIT foster the energy turnaround and reorganization of the energy system in Germany. KIT links excellent competences in engineering and science with know-how in economics, the humanities, and social science as well as law. The activities of the KIT Energy Center are organized in seven topics: Energy conversion, renewable energies, energy storage and distribution, efficient energy use, fusion technology, nuclear power and safety, and energy systems analysis. Clear priorities lie in the areas of energy efficiency and renewable energies, energy storage technologies and grids, electric mobility, and enhanced international cooperation in research.