KIT Nanotechnology – A Model for China 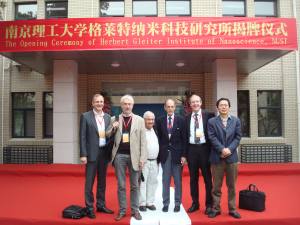 The Chinese Nanjing University of Science and Technology is establishing a nanoscience institute using the Institute of Na-notechnology (INT) of Karlsruhe Institute of Technology (KIT) as a model. The new institute is named after and will be headed by Professor Herbert Gleiter. The co-founder and former director of INT, where he is still conducting research, is a pioneer of nanosciences worldwide. At the Herbert Gleiter Institute of Nanoscience, five research groups will be established, of which four will be headed by leading INT nanoscientists.

The Herbert Gleiter Institute of Nanoscience (HGI) in Nanjing celebrated its official opening in late October. As recommended by an international expert commission of the Nanjing University of Science and Technology (NUST), the new research institute will work in the area of nanoscience. In analogy to the appointment procedures of the Max Planck Society, the expert commission proposed to establish the new institute around an internationally leading scientist in this field. Based on this recommendation, NUST appointed Professor Herbert Gleiter the director of the institute.

Other members of the HGI Board of Directors are Professor Horst Hahn, Managing Director of INT and scientific spokesman of the NanoMicro Center of KIT, Professor Thomas Schimmel, INT and Institute of Applied Physics, Professor Harald Fuchs, KIT and Münster University/Center for Nanotechnology (CeNTech), as well as Professor Yong Lei from TU Ilmenau, who is deputy director of the HGI. The scientists will head a working group with two to four associated professors each.

Research of the HGI will focus on the nanostructurization of surfaces and interfaces, on nanoglasses as well as on nano electrochemistry, nanocatalysis, nanoanalytics, novel nanolithography methods, and self-organized nanostructures. The same research areas are presently being established at KIT. “This cooperation is of long-term and complementary character. We do not only want to coordinate research contents, but also the purchasing of large equipment,” says Professor Horst Hahn. At Nanjing, a new analytics center with large devices in the amount of EUR 7 million can be used by the scientists. Other facilities will be purchased, if necessary. The scientists to be employed by HGI will first spend several months at INT to familiarize with research and teaching methods and to be enabled to run the working groups at Nanjing later on. 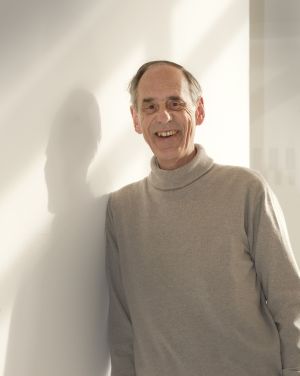 For his research into nanosciences, Herbert Gleiter was granted more than 40 awards, including the Leibniz Prize of the German Research Foundation (1988), the Max Planck Research Prize of the Alexander von Humboldt Foundation and the Max Planck Society (both 1993), the Blaise Pascal Medal of the European Academy of Sciences (2009) as well as six honorary doctorates of universities in Germany, Switzerland, and outside of Europe. Gleiter is elected member of seven national academies of sciences in Germany and abroad, among others of the Leopoldina, the National Academy of Sciences in Germany, in which he was member of the executive committee for a period of four years. He is fellow and honorary member of seven science organizations in his field of work, among others of the American Materials Research Society and the German Materials Research Society. From 1994 to 1998, he was member of the executive board of the then Forschungszentrum Karlsruhe. In 1998, Gleiter founded and managed the Institute of Nanotechnology together with Noble Prize laureate Professor Jean-Marie Lehn and Professor Dieter Fenske. Presently, the 74-year-old Gleiter is active in the Network of Excellent Retired Scientists of KIT and pleased to be able to impart his knowledge and experience to the younger generation. He is currently studying nanoglasses, a new class of non-crystalline nanomaterials, and the transition between classical physics and quantum physics.