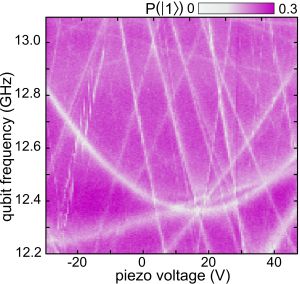 In the far future, superconducting quantum bits might serve as components of high-performance computers. Today already do they help better understand the structure of solids, as is reported by researchers of Karlsruhe Institute of Technology in the Science magazine. By means of Josephson junctions, they measured the oscillations of individual atoms “tunneling” be-tween two positions. This means that the atoms oscillated quantum mechanically. Deformation of the specimen even changed the frequency (DOI: 10.1126/science.1226487).

“We are now able to directly control the frequencies of individual tunneling atoms in the solid,” say Alexey Ustinov and Georg Weiß, Professors at the Physikalisches Institut of KIT and members of the Center for Functional Nanostructures CFN. Metaphorically speaking, the researchers so far have been confronted with a closed box. From inside, different clattering noises could be heard. Now, it is not only possible to measure the individual objects contained, but also to change their physical properties in a controlled manner.

The specimen used for this purpose consists of a superconducting ring interrupted by a nanometer-thick non-conductor, a so-called Josephson junction. The qubit formed in this way can be switched very precisely between two quantum states. “Interestingly, such a Josephson qubit couples to the other atomic quantum systems in the non-conductor,” explains Ustinov. “And we measure their tunneling frequencies via this coupling.”

At temperatures slightly above absolute zero, most sources of noise in the material are switched off. The only remaining noise is produced by atoms of the material when they jump between two equivalent positions. “These frequency spectra of atom jumps can be measured very precisely with the Josephson junction,” says Ustinov. “Metaphorically speaking, we have a microscope for the quantum mechanics of individual atoms.“

In the experiment performed, 41 jumping atoms were counted and their frequency spectra were measured while the specimen was bent slightly with a piezo element. Georg Weiß explains: “The atomic dis-tances are changed slightly only, while the frequencies of the tunneling atoms change strongly.” So far, only the sum of all tunneling atoms could be measured. The technology to separately switch atomic tunneling systems only emerged a few years ago. The new method developed at KIT to control atomic quantum systems might provide valuable insights into how qubits can be made fit for applica-tion. However, the method is also suited for studying materials of conventional electronic components, such as transistors, and estab-lishing the basis of further miniaturization.