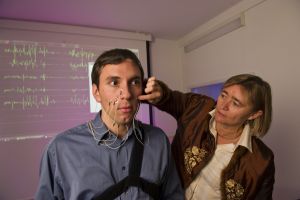 Today, Professor Tanja Schultz of Karlsruhe Institute of Technology (KIT) is granted the Research Award for Technical Communication in the amount of EUR 20,000 by the Alcatel-Lucent Foundation. The computer scientist has established “silent speech communication” as an international field of research. The technology developed by her measures the activity of face muscles during speech by means of electromyography and uses pattern recognition methods to translate these signals back into the, also silently, spoken words. The awards ceremony will take place this evening at the Neues Schloss, Stuttgart.

“Silent speech communication” has numerous application potentials: Silent telephoning does not only reduce the noise level in the public, but also allows for the safe transmission of confidential information like passwords and PINs. The technology developed by Tanja Schultz may also help people, who lost their voice due to accidents or diseases. In the near future, the voice of elderly or weak persons might also be supported or strengthened.

In electromyography, electrodes on the skin surface record the electric signals (potentials) generated by the contraction of articulation muscles. These are the muscles needed for speech and for moving the lips, tongue, or larynx. Analysis of these signals by signal pre-processing and pattern recognition methods allows conclusions to be drawn with respect to the movements and, hence, to the speech produced. As electromyography also measures muscle activity when the speaker is not audible, this method can also be used to recognize silent speech. Then, the speech recognized can be represented in text form on the computer or made audible. The method may be applied in man-machine communication as well as in machine-supported interpersonal communication.

The Board of Trustees of the Alcatel-Lucent Foundation for Communications Research justified the award for Tanja Schultz by her high scientific excellence and the relevance of her work to application in the field covered by the Foundation, i.e. better interaction of man and technology.

Since 1980, the Board of Trustees of the Alcatel-Lucent Foundation in the Stifterverband für die Deutsche Wissenschaft has been granting annually an award to an excellent scientist, whose research focuses on “man and technology in communications systems”. The award amounts to EUR 20,000. The 2012 Research Award for Technical Communication will be handed over on Friday, October 12, 17 hrs, at the Weißer Saal des Neuen Schlosses, Stuttgart. The laudation speech will be made by the member of the Board of Trustees Professor Dr. Wolf-Dieter Lukas, Head of the Department for Key Technologies, Research for Innovations of the Federal Ministry of Education and Research. Afterwards, Professor Tanja Schultz will present her field of research briefly. In addition to the Research Award for Technical Communication, the Board of Trustees grants prizes for PhD theses of economists in the field of “communications and information technology”.

Tanja Schultz, born in 1964, first completed her studies of mathematics and sports for teaching at schools in 1989 by the first state examination. After that, she started to study informatics at the then Universität Karlsruhe (TH), where she was conferred her doctorate in multilingual speech recognition in 2000. Afterwards, Schultz started to work as a post-doctoral fellow. From 2002, she worked as research scientist and from 2006 as research professor at Carnegie Mellon University (CMU), Pittsburgh, USA. In 2007, she accepted the appointment by KIT and is now holding the Chair for Cognitive Systems at the Institute of Anthropomatics. Since 2007, Schultz has been member of the board of the International Speech Communication. At KIT, she is founding member of the Institute of Anthropomatics (2009) and member of the founding and steering committee of the KIT Anthropomatics and Robotics Focus (2010). Last year, Tanja Schultz was awarded the PLUX Wireless Biosignals Award (BIOSTEC 2011). This year, she was granted the best paper award together with Christoph Amma and Marcus Georgi at the 16th International Symposium on Wearable Computers (ISWC).

In 2007 already did Tanja Schultz establish the Cognitive Systems Lab at KIT. Her team has a leading position worldwide in the recognition of silent speech by electromyography, i.e. the interface between speech recognition and biosignal processing. The first real-time-capable prototype of her system was presented at the CeBIT trade fair in 2010. At the Karlsruhe Decision & Design Lab funded by the German Research Foundation (DFG), Tanja Schultz is now planning to further her developments. The laboratory is equipped with 40 cabins and mobile biosignal devices. It offers best conditions for experiments with a large number of persons in a controlled laboratory environment and under real conditions.

About the Alcatel-Lucent Foundation for Communications Research

The Alcatel-Lucent Foundation is a non-profit foundation to support science. Its multidisciplinary scientific network focuses on comprehensive topics relating to the information society. Among the aspects covered are new broad-band media, man/technology interaction, e-government, media and information legislation, data protection, data security, safe communication, and mobility communication. All disciplines involved, from natural sciences to engineering to economics to social sciences to engineering philosophy, are addressed.