Research for an Urban Environment Worth Living in 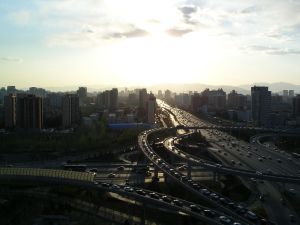 Streets in Beijing. More than half of global population is living in cities. (Photo: KIT, Stefan Norra)

The Urban Environment Symposium from September 16 to 19, 2012, in Karlsruhe is dedicated to various aspects of the urban environment. At the conference that will be held in English, researchers from all over the world will discuss a wide scope of topics extending from mobility management to air pollution to the role of cities in climate change. For the first time, KIT will host this international symposium that is organized by KIT together with the Chalmers University of Gothenburg/Sweden. Representatives of the media are cordially invited.

The symposium will be opened officially in building 10.50 on KIT Campus South on Monday, September 17, 9.00 hrs, by Dr. Gisela Splett, State Secretary of the Baden-Württemberg Ministry of Transport and Infrastructure, and Dr. Peter Fritz, KIT Vice President for Research and Innovation. PD Dr. Stefan Norra, spokesperson of the topic “Urban Systems” of the KIT Climate and Environment Center and Head of the KIT Institute of Geography and Geoecology, and Professor Greg Morrison, Chalmers University of Technology, will also speak during the opening. The Lord Mayor of Karlsruhe, Heinz Fenrich, will welcome the participants in the symposium at the city hall on Monday evening.

The international Urban Environment Symposium that takes place for the 11th time in 2012 has been assuming a leading position as a forum covering research into the urban environment for nearly 30 years now. It was founded in 1983 in London as a symposium on “Highway Pollution”. Now, it covers all aspects of climate and environment in urban systems. Cities represent the living space of more than half of the global population. They dominate flows of materials and energy that significantly influence the development of climate and the environment. The 11th Urban Environment Symposium will focus on aspects of climate change – reduction and adaptation, environmental pollution, biodiversity, health in cities, urban infrastructures, modeling of urban systems, and systems analysis.

The program of the 11th Urban Environment Symposium is available at http://hues.se/programme/.