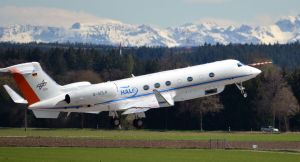 HALO is taking off. The “bellypod” that accommodates the GLORIA infrared spectrometer can be seen underneath the aircraft fuselage. (Photo: Mahesh Kumar Sha, KIT)

GLORIA, the innovative imaging infrared spectrometer of Karls-ruhe Institute of Technology (KIT), will take part in the first at-mospheric science mission of the new German HALO research aircraft from the Arctic to the Antarctic. On August 20, HALO will be handed over to the scienctific community by Germany’s Federal Minister Professor Annette Schavan. GLORIA, a novel and worldwide unique infrared imaging spectrometer developed jointly by research groups from KIT and Forschungszentrum Jülich, has been installed on board of HALO in a bellypod, a dedicated compartment mounted underneath the aircraft fuselage,. During TACTS, the first atmospheric science mission of HALO , GLORIA will measure climate-relevant atmospheric trace gases with unprecedented spatial coverage and resolution.


GLORIA is the acronym of “Gimballed Limb Observer for Radiance Imaging of the Atmosphere.“ This complicated name refers to a new class  of infrared spectrometers. IR spectrometers decompose thermal radiation emitted by atmospheric gases into its spectral colors. As a result, these gases can be determined very precisely. GLORIA combines an IR detector field with a spectrometer. The result is a type of IR camera, by means of which the spatial distribu-tion of the gases can be measured as well. GLORIA was developed jointly by KIT and Forschungszentrum Jülich under the framework of a large investment program of the Helmholtz Association. It is the first of a new generation of IR instruments worldwide, which are planned to be used on airborne carriers and on board of satellites to improve weather forecast and climate models.

“The GLORIA experiment is central constituent of the HALO-TACTS scientific measurement campaign that is aimed at studying the com-position of the upper troposphere and lowermost stratosphere along with exchange processes between such atmospheric compartments,” explains Hermann Oelhaf, who coordinates the project on the part of the Institute of Meteorology and Climate Research of KIT. “With GLORIA, we measure temperature, cloud parameters, and a number of climate-relevant trace gases at altitudes from 5 to 15 km with high spatial resolution. Among these gases are carbon dioxide, methane, ozone, and water vapor as well as many nitrogen and chlorine containing compounds.” 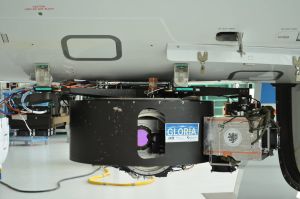 The GLORIA infrared spectrometer after installation underneath the body of HALO.

TACTS (Transport and Composition in the Upper Tropo-sphere/Lowermost Stratosphere) is a measurement campaign over several weeks coordinated by the University of Frankfurt. Measure-ments between Europe and Africa are planned. In addition, meas-urement flights will be made from 80°N to 70°S during the ESMVAL campaign (coordinated by DLR) forvalidating chemistry-climate models. Measurements of two-dimensional distributions by GLORIA will considerably extend the database of the rather locally measuring (in-situ) instruments forming a large part of the HALO payload.