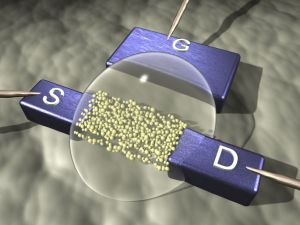 From July 01, 2012, Karlsruhe Institute of Technology (KIT) will coordinate two new Helmholtz Virtual Institutes: “Printed Electronics Based on Inorganic Nanomaterials: From Atoms to Functional Devices and Circuits” and “DESERVE: Dead Sea Research Venue”. At the virtual institutes, scientists of various Helmholtz Centers and universities in Germany and abroad will work on strategic research projects.

The Virtual Institute “Printed Electronics Based on Inorganic Nanomaterials: From Atoms to Functional Devices and Circuits” is aimed at developing interdisciplinary cooperation concepts for the manufacture of commercially relevant printed circuits. Printed electronics is based on the manufacture of electronic components by standard printing techniques, such as ink jet printing or roll-to-roll printing. “The advantages of printable electronics of inorganic particles are the high theoretical mobility of charge carriers and the stability of the materials,” says Professor Horst Hahn, Head of the Institute of Nanotechnology of KIT and spokesperson of the virtual institute. So far, processing of inorganic materials has been highly complex. High temperatures are required, as a result of which inexpensive carriers, e.g. paper and polymers, are not suited for printed electronics. To overcome these restrictions, scientists pursue two new concepts for transistor gating: Use of solid composite electrolytes and inorganic nanostructures as active layers (three-dimensional gating) and use of a hybrid system of organic and inorganic structures. It is aimed at developing novel materials and electronic components and at determining their functionality and stability. Economic aspects and technical feasibility are also taken into account. Partners of the Virtual Institute are TU Darmstadt, the University of Duisburg-Essen, ETH Zurich, and the Lawrence Livermore National Laboratory in the USA. The project is funded with about EUR 2.7 million by the Helmholtz Association. 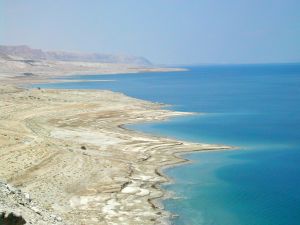 The Dead Sea as an outdoor laboratory: The sea level drops by one meter per year.
(Photo: Ulrich Corsmeier)

KT will also coordinate the Virtual Institute “DESERVE: Dead Sea Research Venue” that will combine atmosphere and climate research with earth sciences and water research. “The Dead Sea will be our outdoor laboratory. It is a worldwide unique natural and cultural area, in which we can reproduce rapid environmental change of long-term impact,” says Professor Christoph Kottmeier, Head of the Troposphere Research Division of KIT’s Institute of Meteorology and Climate Research and spokesperson of the virtual institute. “The findings made with respect to climate and environmental change on the Dead Sea may be transferred to other regions, where the processes are slower or do not have such a big impact.” DESERVE deals with three big challenges: Environmental risks, water availability, and climate change. It is aimed at improving the understanding of the development of geophysical phenomena, such as sinkholes or wadis with occasional flash floods due to thunderstorms. Another big issue is the water budget of the region, including water availability, salinization, and its impacts on desert formation. These studies shall be the basis of development prognoses for the next 10 to 50 years. For this purpose, long-term measurements of geophysical parameters, such as evaporation, inflows, and earth crust movements, will be carried out. Detailed studies of interacting processes in the atmosphere (air), hydrosphere (water), and lithosphere (soil) as well as simulations for the prognosis and prevention of geophysical risks shall be developed. DESERVE is based on the Helmholtz expertise in the disciplines of “atmosphere and climate”, the “Earth’s crust”, and “water” at KIT, the German Research Center for Geosciences, Potsdam (GFZ), and the Helmholtz Center for Environmental Research (UFZ). Another focus lies on the promotion and education of young scientists, among others by mentoring programs and the funding of startups. Partner institutions from Israel, Jordan, Palestine regions, and Germany participate. In the next five years, the Helmholtz Association will fund DESERVE with an amount of about EUR 3 million. 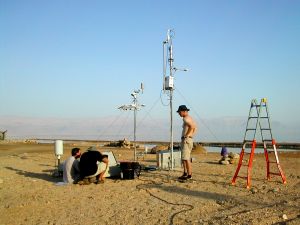 From July 01, 2012, the Helmholtz Association will fund a total of eleven new Helmholtz Virtual Institutes with EUR 30 million. At these institutes, scientists of Helmholtz Centers and partners from universities and other renowned research institutions in Germany and abroad work on a joint project. Over a period of three to five years, Virtual Institutes receive up to a maximum of EUR 600,000 from the Initiative and Networking Fund. In addition, the centers provide own funding for the research projects having a total budget of up to EUR 900,000 per year.