KIT Engineer Is Granted Bertha Benz Prize in the Amount of EUR 10,000 for Research Into the Accommodation System 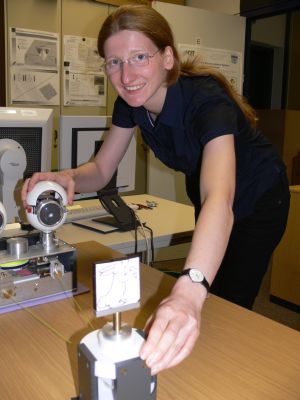 By changing the optical power of the lens (accommodation), the human eye focuses on an object as its distance varies. However, this ability decreases with increasing age. For her research into an artificial accommodation system, Dr. Liane Rheinschmitt of the Institute of Applied Computer Science (IAI) of Karlsruhe Institute of Technology (KIT) has now been granted the Bertha Benz Prize in the amount of EUR 10,000. With this prize, the Daimler and Benz Foundation annually honors an excellent doctorate of a young German female engineer.


Liane Rheinschmitt wrote her Ph. D. thesis entitled “First Integrated Design and System Integration for the Artificial Accommodation System” in the team of Professor Georg Bretthauer, one of the Directors of IAI on KIT Campus North and Head of the Institute of Applied Computer Science / Automation on KIT Campus South. “The work of Mrs. Rheinschmitt represents an important step towards the implementation of an artificial accommodation system, by means of which people suffering from presbyopia or after a cataract operation are enabled to see clearly over both longer and shorter distances without wearing any glasses. In this way, also elderly people will be enabled to continue to participate in social life”, says Bretthauer.

“The thesis written by Mrs. Rheinschmitt shows her capabilities as a modern and interdisciplinary female engineer. Her work is based on fundamental knowledge of microstructure technology and opens up a wide field of future applications in medicine,” said Professor Eike Böhm, Head of the Quality Section of Mercedes Benz PKW, Daimler AG, during the awards ceremony at Heidelberg.

With the help of accommodation, that is by adapting optical power of the eye lens, the human eye can focus on objects as their distance varies. This ability decreases with increasing age. At an age of about 45 to 50 years, reading without aids is getting increasingly difficult. All over world, about 1 billion people are affected by presbyopia. In addition, many suffer from cataract, a clouding of the lens that obstructs the passage of light and has to be removed by an operation. In Germany alone, about 600,000 cataract operations are performed annually.

The scientific work of Liane Rheinschmitt is the basis of the implementation of an artificial accommodation system in smallest space. By an operation, this system might be implanted directly into the eye affected. The novel mechatronic lens can restore to the complete extent the ability of the eye to focus on variable distances, contrary to the presently used inflexible artificial lenses. For the people affected, this would mean an enormous gain in quality of life.

Rheinschmitt was selected in a process consisting of several stages. The jury justified its decision as follows: “There is no doubt that the Ph. D. thesis is of societal relevance. The personal history of Mrs. Rheinschmitt is unusual and characterized by a permanent striving for higher academic education on various levels. Her interdisciplinary career also reflects the scope of topics covered by her engineering research activities. The Ph. D. thesis of Mrs. Rheinschmitt is of high quality and an excellent nomination.” Liane Rheinschmitt was born at Madgeburg in 1980. In 2000, she started to study mechatronics at the Karlsruhe Cooperative State University. Three years later, she graduated in engineering. In 2004, she continued her academic career by studying mechanical engineering at the former Universität Karlsruhe (TH), today’s KIT, and completed her studies in July 2007. She wrote her diploma thesis as a GEARE scholarship holder (Global Engineering Alliance for Research and Education) at the Purdue University in the USA (Indiana). Kleinschmitt worked on her Ph. D. thesis at KIT’s Institute of Applied Computer Science and submitted it to the Department of Mechanical Engineering in 2011.