Play of Colors with Graphene 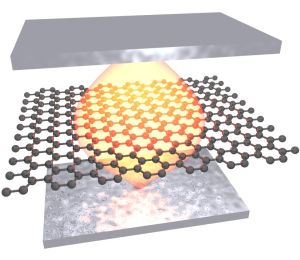 An optical microcavity consists of two semi-transparent metal mirrors, whose distance determines the color of the light generated by graphene. (Figure: KIT)

Graphene consists of a layer of carbon atoms arranged in a honeycomb structure. The extremely thin and stable material has a high potential for applications in optoelectronics. Researchers of Karlsruhe Institute of Technology, TU Darmstadt, the University of Cambridge, and IBM have now developed optoelectronic components based on graphene. With them, information technology systems may become smaller and perform better in the long term. The results are presented in the Nature Communications journal.

Graphene is used in everyday life. For example, the material is found in billions of layers stacked on top of each other in conventional graphite pencils. As a single atomic layer, graphene is an extraordinarily stable material of high thermal and electric conductivity. It can absorb and emit light at the same time. Hence, the material has a high potential for applications in optoelectronics. Optoelectronics deals with the conversion of electric into optical signals (light) and vice versa. It is the long-term objective of research to reach smaller dimensions of optoelectronic components, such as light-emitting diodes acting as interfaces between electric and optical components. This will make information technology systems much smaller and enhance their performance in the long term.

The work performed by the team of Professor Ralph Krupke from Karlsruhe Institute of Technology (KIT) and TU Darmstadt, Professor Hilbert von Löhneysen (KIT), Professor Andrea Ferrari from the University of Cambridge, and Dr. Phaedon Avouris from the research lab of IBM shows that optoelectronic components selecting light of variable wavelengths can also be made of graphene.

The technical challenge was to couple the graphene to the electrodes and to integrate the material in an optical microcavity. An optical microcavity is a structure in the micrometer range, which consists of two mirrors that are arranged at a precisely defined distance and semi-transparent for light of various wavelengths. As a result of the precisely defined mirror distance, the microcavity is transparent for light of a certain color. Dr. Antonio Lombardo (UC) transferred graphene to the target substrate. Then, physicist Michael Engel (KIT) coupled the graphene to the electrodes by complex fabrication methods on the nano- and microscales and placed it between two silver mirrors arranged at a distance of a few nanometers.

Dr. Mathias Steiner (IBM) and Michael Engel (KIT) succeeded in heating up the graphene by applying electric voltage. Similar to a bulb, the material started to emit light at high temperatures. Contrary to the white light of a bulb, however, the color of the light emitted is determined by the surrounding microcavity.

Work was supported by the DFG Center for Functional Nanostructures.

For the online version of the article, click
http://www.nature.com/ncomms/journal/v3/n6/full/ncomms1911.html