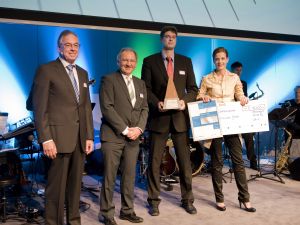 Dr. Alexandra Matzke and Dr. Matthias Klaften with the awards handed over by Peter Hofelich, member of state parliament, and Dr. Tilman Schad, CEO of bwcon (from right to left). (Photo: bwcon)

Yesterday evening, amcure GmbH was granted the second prize of the CyberOne Award for the development of an active substance for the treatment of pancreas cancer and the Special Award of the state of Baden-Württemberg for the best research commercialization. amcure is a startup founded by three scien-tists of the Institute of Toxicology and Genetics and one employee of the Innovation Management Service Unit of Karlsruhe Institute of Technology (KIT). The CyberOne Award and the State Award are endowed with EUR 5000 each.


With the CyberOne Award, the Wirtschaftsinitiative Baden-Württemberg: Connected e.V. (bwcon, Baden-Württemberg econo-my initiative) honors the best business plans of startups and highgrowth medium-sized companies in all technology sectors every year. “The Award reflects the enormous potential of our approach. We now have the opportunity to develop new therapies for the treatment of pancreas cancer,” said Dr. Matthias Klaften, one of the directors of amcure.

Pancreas cancer is one of the most aggressive types of cancer. 85 to 95% of the patients die within a few months after diagnosis. Usu-ally, the cancer has reached an advanced stage already when the diagnosis is made, as pain and other symptoms occur at a very late point of time. In most cases, the primary tumor has already formed metastases. Often, pancreas tumors can no longer be operated in this stage.

The substance AM001 now promises to reach a much better effi-ciency in the treatment of pancreas cancer. The second and scien-tific director of amcure, Dr. Alexandra Matzke, identified the sub-stance AM001 at the KIT Institute of Toxicology and Genetics and now works on its further development at the startup: “Tumor cells and metastases of carcinomas of the pancreas hardly respond to conventional angiogenesis blockers, i.e. to substances inhibiting the growth of blood vessels. The special feature of AM001 is its highly selective effect on malignant cells.” Similar to a key in a lock, AM001 docks to a certain receptor, the co-receptor CD44v6, on cancer cells. In this way, it prevents further transmission of signals for the formation of new blood vessels in the tumor and the development of metastases. According to the findings obtained so far, healthy tissue remains intact.

The startup, in which KIT is one of the partners, is now proceeding with drug development. Until licensing of the drug in about eight years from now, major pre-clinical and clinical tests will have to be performed.

Amcure was selected for the CyberOne Award by a jury of success-ful entrepreneurs and managers in industry, research, and the finance sector. For the third time in succession, a startup of KIT was successful in this competition. Visolas GmbH and IONYS AG were granted this Award in 2011 and 2010, respectively.


Karlsruhe Institute of Technology (KIT) is a public corporation according to the legislation of the state of Baden-Württemberg. It fulfills the mission of a university and the mission of a national research center of the Helmholtz Association. KIT focuses on a knowledge triangle that links the tasks of research, teaching, and innovation.