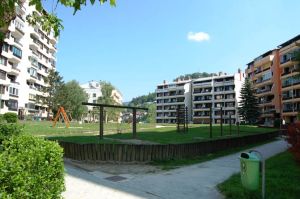 How can an urban district be designed with the participation of citizens? Answers are provided by a workshop under the “ReNew Town“ EU project. (Photo: Marko Govek)

Quality of life in an urban district depends on many factors, for instance, on affordable rents, a good transportation network or diverse offers for leisure time. The “ReNew Town” EU research project in which Karlsruhe Institute of Technology (KIT) participates focuses on urban district development in former socialist countries. Project results will be presented at a workshop on “Urban District Upgrading” on Wednesday, June 20, at KIT. The interested public and experts are cordially invited. Prior registration is required.

Buildings and public squares in need of reconstruction, bad infrastructures, and lacking offers for leisure time – the need for modernization is high in many cities in former socialist countries like Slovenia, Slovakia, the Czech Republic, and Poland. “Urban reconstruction and upgrading mean more than just architectonic upgrading and rehabilitation. Design of social and cultural life affects the well-being of the inhabitants of an urban district,” says Christina Götz from the KIT Institute for Technology Assessment and Systems Analysis (ITAS).

Since 2011, ITAS been participating in the ReNew Town EU project by supporting its partner countries in realizing citizen participation in urban district upgrading. Eight Central European municipalities and research institutions are involved in the project.

Under ReNew Town, ITAS supports its partner countries in developing practicable solutions for urban district development, for example by presenting strategies of German cities and municipalities. The ITAS project team selected ten exemplary projects for urban district upgrading with the active participation of citizens. An old building made of pre-cast concrete slabs is converted into a cultural center and a hotel established and run by children. A former kindergarten building is converted into a center for young startups. To find out how citizens can be integrated in designing an urban district, the ITAS project team made surveys in East and West Germany. One of these surveys focused on a project of the Karlsruhe Renters’ Initiative (MiKa), in the course of which former barracks buildings were converted into residences with cultural and common rooms. MiKa has shown that motivation and the willingness to compromise of the actors as well as a good project management structure are essential to the success of such a project. These and other results will be incorporated in the solutions developed under ReNew Town.

To find solutions for four pilot projects in the cities of Velenje (Slovakia), Prague (Czech Republic), Cracow (Poland), and Hnusta (Solvenia) together with the interested public, ITAS will organize a discussion with experts on Wednesday, June 20, 10 to 16 hrs (Ostendorfhaus, Weberstraße 5, Karlsruhe). The interested public and experts are cordially invited to actively discuss the participation of citizens in urban district upgrading. Discussion will be based not only on the study results obtained, but on the experience gained in East and West Germany. Prior registration by e-mail to christina goetz ∂does-not-exist.kit edu or by phone +49 (0)721 608/28036 is required.

ReNew Town is part of the Central Europe programme of the European Union to promote cooperation of central European countries.