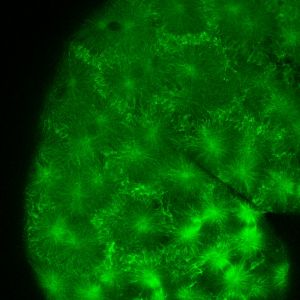 Microscopes provide valuable insights in the structure and dynamics of cells, in particular when the latter remain in their natural environment. However, this is very difficult especially for higher organisms. Researchers of Karlsruhe Institute of Technology (KIT), the Max Planck Institute for Polymer Research, Mainz, and the American National Institutes of Health (NIH) have now developed a new method to visualize cell structures of an eighth of a micrometer in size in living fish larvae. It is published in the Nature Methods magazine (DOI:10.1038/nmeth.2025).

“The zebrafish is perfectly suited for genetic studies of cells, as its larvae are completely transparent,” explains Marina Mione, KIT. To visualize certain structures, these are colored mostly by genetic engineering methods using a fluorescent dye. Mione studied parts of the cellular skeleton of fish, the so-called microtubuli. The thread-shaped microtubuli have a length of about 100 µm and a diameter of about 20 nm, corresponding to a hundred thousandth of a human hair. “Microtubuli exist everywhere in the cell and are required for its division and motion.”

In the new microscopy method, the object is not illuminated completely, but only at a certain spot with special light. Scattered light is minimized and the illuminated detail is represented sharply. A series of images taken at variable illumination is then processed by a computer. In this way, an overall image is obtained. Smart illumination even allows to adjust the depth of field, to image various depth levels, and to combine them into a three-dimensional image on the computer. “Meanwhile, it is possible to reach resolutions of 145 nm in the plane and 400 nm in-between,” says Marina Mione. The images are taken within a few seconds, such that movement of the cells does not cause any unsharpness.

Based on a series of images, videos of the movement of the microtubuli are obtained. In the experiment, it was observed over a period of 60 minutes how the early stage of the fish’s lateral line develops about 45 µm below the skin of the fish. Via this organ, the fish perceives movement stimuli in water. Such images of living organisms also provide valuable findings regarding the development of vertebrates on the cellular level.

The tropical zebrafish living in freshwater has several advantages as a genetic model organism. It is sufficiently small for easy cultivation and large enough to easily distinguish individual organs. It has a short generation cycle and produces many offsprings. As a vertebrate, it has a number of microbiological properties in common with human beings.

Animated video drives through the cell structures of the samples:
http://www.nature.com/nmeth/journal/vaop/ncurrent/full/nmeth.2025.html#/supplementary-information

The publication in Nature Methods: http://www.nature.com/nmeth/journal/vaop/ncurrent/full/nmeth.2025.html

More information on the working group of Marina Mione at KIT : http://www.itg.kit.edu/856.php