Groundwater Contaminated with Arsenic and Selenium in Southeast Asia 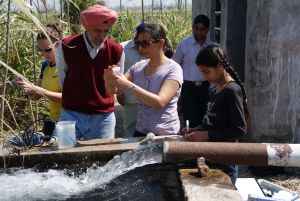 Water sampling with Indian researchers to determine concentrations of selenium and arsenic among others. (Photo: IMG)

The World Health Organization (WHO) refers to it as a mass poisoning: 100 million people worldwide are affected by arsenic-contaminated groundwater, in particular in Southeast Asia. Water and soils of various regions are also contaminated with selenium. Scientists of the Institute of Mineralogy and Geochemistry (IMG) of Karlsruhe Institute of Technology (KIT) study the processes by which arsenic and selenium are released in order to develop specific countermeasures.

“Polluted groundwaters are found above all in the delta plains, in which sediments from the mountains are deposited, for example in the Red River delta in Vietnam or in the delta of the rivers of Ganges and Brahmaputra in India and Bangladesh,” says Professor Thomas Neumann of the IMG. “In these densely populated regions, central drinking water supply and processing systems are lacking, which is why so many people are affected.” The limit value recommended by the WHO for arsenic amounts to 10 µg per liter water. In many countries of Southeast Asia it is in the range of 50. Sometimes, the value measured may even reach several thousand micrograms per liter. If contaminated water is consumed over a longer period of time, health problems occur, ranging from skin diseases, such as black spots on hands and feet, to various types of cancer. Neumann and his team study the mechanisms of release of arsenic and selenium into groundwater in order to develop countermeasures or avoid the polluted aquifers when drilling new wells. 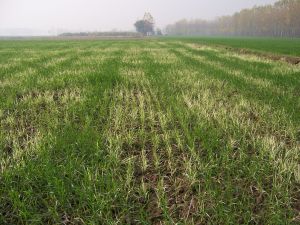 Redox processes are responsible for release. These are chemical reactions, during which electrons are transferred from one reaction partner to the other. Weathering in the mountains, for example, in the Himalaya, results in the release of arsenic and selenium presumably from sulfides that are not stable in the presence of oxygen. Iron oxides, for instance, are formed. Arsenic and selenium bind to them. These compounds are then transported in the rivers and deposited in the delta plains. If oxygen is lacking in the groundwater, the iron oxides dissolve again and the bound arsenic and selenium ions are released into the water. “The release rate is very high, if much organic material is available, such as peat, plant residues, or wastewater. Decomposition of these substances requires oxygen,” explains Dr. Elisabeth Eiche. “In the delta regions in particular, much organic material is contained in the sediment layers. In case of arsenic, release is a large-area process. In Bangladesh, for instance, about 40% of the country are affected.” The scientists concentrate on these redox processes. They can be prevented by permanently raising or lowering the groundwater level, such that chemical conditions remain stable. Filter systems can also be applied, e.g. simple sand filters, in which iron dissolved in water is precipitated by aeration and binds arsenic or selenium.

Presently, research conducted by IMG concentrates on selenium pollution in Punjab. In the “breadbasket of India”, rice and wheat are cultivated mainly. The Young Investigator Group headed by Dr. Monika Stelling studies the influence of anthropogenic, i.e. man-made, modifications on the behavior of selenium in the system water-soil-plant. Scientists have identified irrigation to be the most important pollution pathway. Selenium is not found all over the soil profile, but only in the uppermost fifteen centimeters. In irrigation channels and on the strongly irrigated rice fields, however, its concentration is very high. Now, adapted irrigation cycles have to be developed and transferred to agricultural practice. It is also aimed at finding out which land use is suited best depending on the soil and water quality. “For growing rice, you need much more water than for cultivating wheat. This results in a higher enrichment of selenium in the soil. At the same time, redox conditions in the soil change. The resulting elemental selenium is less mobile and cannot be taken up well by the plants,” says Monika Stelling. Fertilization also has an influence. “Various ions contained in the fertilizer may compete with selenium while taken up by the plant.” Unlike arsenic, selenium is a toxic pollutant and a necessary nutrient at the same time. “We have to think in both directions: Our research is also aimed at providing farmers with recommendations for cultivation in the future and to recommend the plants and fertilizers that are suited best for strongly polluted areas.”

The corresponding experience will be also exchanged at the conference “Selen2012” that will be organized by IMG on October 8 and 9 at KIT. It will address mineralogists, chemists, agricultural scientists, hydrologists and hydrogeologists, biologists, medical scientists, nutrition experts as well as specialists in the field of nuclear waste management.