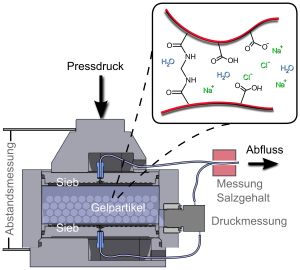 Setup for the desalination of seawater under pressure. (Graphics: Johannes Höpfner, KIT).

According to the UN, drinking water resources are scarce for 700 million people worldwide. In coastal areas, desalination of seawater may help solve this problem. Conventional methods, i.e. distillation and reverse osmosis, however, require much energy and are too cost intensive for the often poor regions. Chemists of Karlsruhe Institute of Technology (KIT) are now working on an entirely new process. Swellable polymer particles (superabsorbers) similar to those in diapers are applied as filters. While swelling, they absorb a fraction of the salt only. Under pressure, they release water with a lower salt concentration.

Professor Manfred Wilhelm and his PhD student Johannes Höpfner from KIT’s Institute for Chemical Technology and Polymer Chemistry have already demonstrated that the principle works. With their process, they can reduce the salt content by more than one third in one cycle. A hydrogel based on acrylic acid is used as swelling material. These spherical cross-linked polymer beads swell in water and can absorb 100 times their mass. As a special feature, the polymers contain charged groups. In dry material, charge density is high, as a result of which the salt is repelled first and mainly water enters the material. When the material swells, charge density is reduced and salt gets in. “At this point, the process is reversed. The swollen hydrogel is pressed out mechanically similar to a sponge,” says Johannes Höpfner. “Compared to seawater, the water produced has a much lower salt content.” The salt content of seawater is 35 g sodium chloride per liter. ”In the first cycle, we want to reach 10 g, after the second 3 g, and after the third, we would like to reach 1 g per liter. Water with such a salt concentration is potable,” says Manfred Wilhelm.

Currently, Johannes Höpfner is working on adapting the superabsorber to this application. “In diapers, the material has to remain dry, also under the pressure of a baby sitting on it. To save energy, we want the material to release the liquid under minimum pressure.” This objective is to be reached by tailoring the cross-linking and charge density of the hydrogels. “If node points and charges are located very closely to each other, the spheres are very hard. In this case, the salt is repelled well, but I need much energy to press out the hydrogel. My work is aimed at finding the optimum,” explains the PhD student. For the further development of the process based on detailed analysis data, he has constructed a new, more precise setup, consisting of a hydraulic press inset of half a liter in volume that separates the polymer from the water. Here, the displacement of the piston, pressure, and salt content can be measured accurately. After measurement, the data is employed in computer simulations executed in cooperation with Stuttgart University.

The idea of Wilhelm and Höpfner met with the interest of several companies. Application, however, will depend on the energy balance among others. “For the conventional processes of distillation or reverse osmosis, where freshwater is separated from brine with the help of a membrane under pressure, 3 - 10 kWh are needed per cubic meter of water. We do not yet know whether we will be better, but we are working on estimation,” says Manfred Wilhelm. However, distillation and reverse osmosis are driven by diesel generators. The process developed by the KIT chemists here may be driven directly by a wind turbine, i.e. in a mechanical and very efficient manner.

The polymer press might represent a better scalable alternative to conventional processes. Technical implementation, however, is still open. “We are creating the scientific basis. Development of a larger facility would be the work of chemical and mechanical engineers,” says Manfred Wilhelm. He considers potential applications of the process to be in niches, for example, a cartridge through which seawater can be pressed manually to extract drinking water in a mobile and simple  manner. The process might be particularly suited for the processing of brackish water, as it works the better, the smaller the salt content is.

This and other innovative products, processes, and services developed by KIT – and the people behind – are presented by the NEULAND report of the KIT Innovation Management Service Unit. This cross-media publication outlines how entrepreneurial spirit and cooperation may turn a good idea into a successful product. Nine stories in the sections entitled potentials, projects, and products follow the paths of ideas to the market.