KIT Climate Researchers Study the Relationship of Aerosols, Cloud Formation, and the Climate 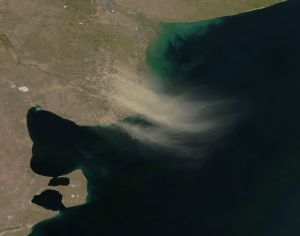 About ten percent of the Earth’s surface are arable lands. Time and again, these lands lie fallow for cultivation reasons or for the regeneration of the soil. As a result of cultivation and wind erosion, dust particles (aerosols) enter the atmosphere. They influence the formation of clouds and precipitation and, hence, they are also supposed to affect the climate. These relationships are studied by a Helmholtz Young Investigators Group at the Institute of Meteorology and Climate Research, Atmospheric Aerosol Research Division (IMK-AAF), of Karlsruhe Institute of Technology (KIT).

The effect of various particles (aerosols) on cloud ice, precipitation, and climate is subject of a Young Investigators Group directed by Dr. Corinna Hoose, IMK-AAF. “Aerosols are condensation nuclei to which water droplets attach. This is the start of cloud formation,” explains Hoose. Her group in particular focuses on ice clouds, i.e. on clouds in which aerosols form ice nuclei. This may influence the albedo of the cloud and, hence, warming of the Earth. “While liquid water clouds, i.e. clouds made of droplets, shield solar irradiation and have a cooling effect, ice clouds may have the opposite effect,” explains Ph. D. student Isabelle Steinke. Moreover, scientists presume that most of the precipitation is initiated by cloud ice. “When ice forms, the crystals grow rapidly, gain weight, and fall down in the form of rain or snow depending on the temperature near the ground surface,” says Corinna Hoose.

IMK-AAF uses the AIDA (acronym of Aerosol Interactions and Dynamics in the Atmosphere) cloud chamber to find out how much ice forms which type and amount of aerosol at what temperature. In the cloud chamber, clouds are formed and analyzed under atmospheric conditions. Isabelle Steinke is presently investigating the impact of aerosols from arable land. “The importance of dust from arable land has long been underestimated. Studies focused on soot particles and desert dust,” says Corinna Hoose. “Now, we have indications that aerosols from arable land may also have a considerable effect.” Presently, about 10% of the Earth’s surface are covered by arable land. Due to the high prices of corn and soy on the world market, additional pastures in South America, for example, are converted into arable land. In experiments with soil dust from arable land near Karlsruhe, Steinke found that these aerosols tend to form more ice than desert dust that is known to be “ice-active”. “This is probably due to the higher content of biological material, such as bacteria, spores or fungi, and plant residues,” says the scientist. In previous AIDA experiments, certain bacteria were found to be extraordinarily ice-active.

In the next months, the group, together with soil scientist Roger Funk from the Leibniz Center for Agricultural Landscape Research (ZALF) and other international research partners, will feed aerosols from arable land in China, Argentina, and Northern Germany into AIDA in order to find out how variable soil properties and the origin affect ice formation.

The results will be used to improve climate models. The Ph. D. student Matthias Hummel, for instance, is working on a model-based estimation of the impact of arable land dust in Europe. “We expect influences, but quantification will be difficult: More arable land, of course, produces more soil dust. But its share in ice and precipitation formation compared to other impacts is still unknown. This knowledge, however, contributes on the way towards more precise climate models.”