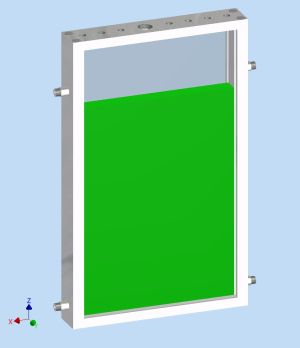 The photobioreactor developed under the ModuLES project will be used to cultivate microalgae in space. (Source: KIT)

Unicellular green algae can supply astronauts with food and oxygen during longer missions. However, the algae have to be adapted to the special conditions in space and in particular to zero gravity. Under the new ModuLES (Modular Life Support System) project, scientists of KIT’s Bioprocess Engineering Division are developing a special reactor for the cultivation of microalgae in space. ModuLES will have a duration of three years and is funded by the Federal Ministry of Economics with EUR 800,000.

When travelling to remoter destinations in space, people will require stable life support systems. Such systems consisting of higher plants, microorganisms, and algae can supply the astronauts with food and oxygen, recycle waste and CO2, and contribute to energy supply. Unicellular green algae are particularly suited as components of modular life support systems. With the help of light energy, they produce biomass, emit oxygen, and consume CO2.

Research into life support systems for astronautics so far has concentrated on closed systems that do not only contain plants and microalgae, but also oxygen-consuming species like bacteria or fish larvae. These systems are extremely complex and hardly allow any statements to be derived with respect to the performance of individual components. The new ModuLES project coordinated by KIT focuses on the microalga as a separate component. The project on behalf of the German Aerospace Center (DLR) is executed in cooperation with researchers from Ruhr-Universität Bochum and the University of Bremen and aimed at developing a flexible and robust photobioreactor system for the green alga chlamydomonas reinhardtii. This photosynthetic protozoon can be used to supply oxygen and to produce molecular hydrogen. Due to its biomass composition, the alga may also be used as a vitamin-rich food for astronauts.

Within the framework of ModuLES, scientists of the Bioprocess Engineering Division of KIT headed by Professor Clemens Posten develop and construct a plate reactor together with peripheral units, such as pumps and reservoirs, and an artificial LED-based illumination system. As the algae will be cultivated in space later on, the researchers are facing special challenges. “Increased radiation might damage the algae. Microgravity, i.e. reduced gravity, will influence the orientation of the cells and aggravate mass transfer and heat exchange,” explains Professor Posten.

Under conditions of gravity, gas bubbles do not ascend. For this reason, the researchers use a membrane to aerate the algae culture and for bubble-free and controlled mass transfer. Long-term stability is needed for use of the algae in a modular life support system for space stations and long space travels. It is therefore planned to recycle the cultivation medium and to enrich it with nutrients.

The project is funded by the Federal Ministry of Economics and Technology with an amount of EUR 800,000. ModuLES started in April 2012 and will have a duration of three years. After first experiments on earth, the scientists will test the microalga-based photobioreactor system during parabolic flights with the airbus ZERO-G. They will study the influence of microgravitation on photosynthetic activity, the respiration of the algae as well as on potential hydrogen production. After the algae will have survived the parabolic flights, tests on satellites or the International Space Station ISS will follow.