Not Only Invisible, but Also Inaudible 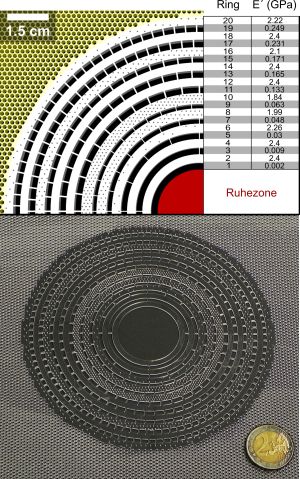 Progress of metamaterials in nanotechnologies has made the invisibility cloak, a subject of mythology and science fiction, become reality: Light waves can be guided around an object to be hidden, in such a way that this object appears to be non-existent. This concept applied to electromagnetic light waves may also be transferred to other types of waves, such as sound waves. Researchers from Karlsruhe Institute of Technology (KIT) have now succeeded in demonstrating for the first time an invisibility cloak for elastic waves. Such waves also occur in strings of a guitar or drum membranes.

It is as if Harry Potter had a cloak that also makes him unhearable. “Maybe a place of peace and quiet in the Christmas season,” say the KIT researchers, who succeeded in transferring the concepts underlying the optical invisibility cloak to acoustic waves in a plate.

“The key to controlling waves is to specifically influence their local speed as a function of the ‘running direction’ of the wave,” says Dr. Nicolas Stenger from the Institute of Applied Physics (AP). In his experiment, he used a smartly microstructured material composed of two polymers: A soft and a hard plastic in a thin plate. The vibrations of this plate are in the range of acoustic frequencies, that is some 100 Hz, and can be observed directly from above. The scientists found that the sound waves are guided around a circular area in the millimeter-thin plate in such a way that vibrations can neither enter nor leave this area. “Contrary to other known noise protection measures, the sound waves are neither absorbed nor reflected,” says Professor Martin Wegener from the Institute of Applied Physics and coordinator of the DFG Center for Functional Nanostructures (CFN) at KIT. “It is as if nothing was there.” Both physicists and Professor Martin Wilhelm from the KIT Institute for Chemical Technology and Polymer Chemistry have now published their results in the journal “Physical Review Letters.”

The scientists explain their idea by the following story: A city, in the shape of a circle, suffers from noisy car traffic through its center. Finally, the mayor has the idea to introduce a speed limit for cars that drive directly towards the city: The closer the cars come to the city area, the slower they have to drive. At the same time, the mayor orders to build circular roads around the city, on which the cars are allowed to drive at higher speeds. The cars can approach the city, drive around it, and leave it in the same direction in the end. The time required corresponds to the time needed without the city. From outside, it appears as if the city was not there.